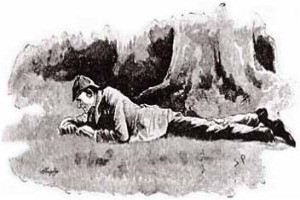 Two of literature’s most famous detectives had a major influence on the development of the modern crime scene investigation, according to a historian from The University of Manchester.

Dr Ian Burney’s research into the history of “CSI” has revealed that two of its founding fathers – Frenchman Edmond Locard and Austrian Hans Gross – were influenced by British writers Arthur Conan Doyle and R Austen Freeman.

Conan Doyle, a doctor and creator of Sherlock Holmes and Freeman, another doctor whose creation Dr John Evelyn Thorndyke is the prototype for the modern forensic investigator, were evangelists for a professionalised CSI – according to the material analysed by Dr Burney.

The historian was speaking at the 24th International Congress of the History of Science, Technology and Medicine, held at The University of Manchester.

Dr Burney is based at the University’s Centre for the History of Science, Technology and Medicine. He said: “It’s surprising but clear that the fictional creations of Sherlock Holmes and Dr Thorndyke were a major influence on the crime scene as we know today.

“The stories showcased new methods of CSI: protecting the crime scene from contamination; preserving and recording the relationships between all objects in the scene, even the most trivial; and submitting minute trace evidence to scientific scrutiny.

“So it’s fair to say that Conan Doyle and Freeman helped investigators to systemise their methods to make the invisible, visible and the inconsequential, consequential.

“It wasn’t until the 1920s that dedicated CSIs began to appear as supervisors of a complex police and scientific operation, accompanied by photographers and policemen to search and protect the scene.

“Freeman and Conan Doyle helped bring this about.

“It’s amazing that both writers were able to conceive of the modern crime scene from their own imaginations – though I would guess they were familiar with the writings of Gross and Locard.”

In an English translation of Hans Gross’s handbook for crime investigators, Dr Burney discovered a passage referring to the forensics kit bag taken by English police to crime scenes as “the Thorndyke,” a clear reference to Freeman’s character.

And in his textbook, Edmond Locard, repeatedly urged all students of police science to read and absorb the lessons of Sherlock Holmes.

Dr Burney added: “During the Victorian era, there were certainly people who investigated the scenes of crimes, but they were was not systematic and scientific in the way they went about their work.

“At murder scenes, the representative of “science” was a medical man – sometimes a pathologist but often just a local practitioner.

“But Sherlock Holmes - and especially Dr Thorndyke- were critical of they way Victorian pathologists might contaminate a scene and helped change practice for good.

According to Dr Burney, ‘The Boscombe Valley mystery’ is one of many examples of how like modern CSI the novels were.

In this story, Holmes laments the destruction of crime scene evidence by “investigators” unaware of the need to adhere to csi protocol saying: “Oh, how simple it would all have been had I been here before they came like a herd of buffalo and wallowed all over it.”

And Dr Thorndyke argued in one of his earliest stories, “Message from the Deep Sea”, that the scene of a murder should be treated like: “the Palace of Sleeping Beauty … Not a grain of dust should be moved, not a soul should be allowed to approach it, until the scientific observer has seen everything in situ and absolutely undisturbed. No tramplings of excited constables, no rummaging by detectives, no scrambling to and fro of bloodhounds.”

The key to solving this particular murder was Thorndyke’s attention to and scientific analysis of sand traces on the dead woman’s pillow.

Dr Burney said: “When we consider the look of a crime scene today, with its protective tents and its ceremonially cloaked guardians, it is not difficult to see it as Thorndyke’s “Palace” come to life.”

The 24th International Congress of the History of Science, Technology and Medicine, is being held at the University of Manchester from July 21 – 28, 2013. The largest ever conference in the subject with more than 1600 attendees, ICHSTM brings together world-renowned academics from over 60 countries to present the latest research and debate current issues in the field.