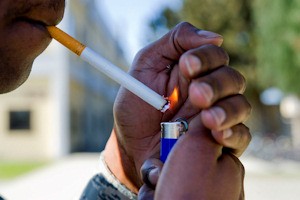 Giving up or reducing smoking and avoiding passive exposure to tobacco smoke may reduce your risk of hearing loss, new research shows.

Current smokers have a 15.1% higher odds of hearing loss than non-smokers The University of Manchester study, funded by Action on Hearing Loss, Medical Research Council and the National Institute for Health Research, found.

Passive smoking also increased the likelihood of hearing loss by 28%.

But ex-smokers had a slightly reduced risk of going deaf - which may be because once they quit they adopt a more healthy life style overall.

The study is published in the Journal of the Association for Research in Otolaryngology today.

Researchers looked at 164,770 UK adults aged 40 to 69 years of age who took hearing tests between 2007 and 2010 when they joined UK Biobank, a national project to improve health.

Dr Piers Dawes, from the Centre for Human Communication and Deafness at The University of Manchester who led the research, said: "Given around 20% of the UK population smoke and up to 60% in some countries, smoking may represent a significant cause of hearing loss worldwide.

"We found the more packets you smoke per week and the longer you smoke, the greater the risk you will damage your hearing."

The link between smoking and hearing loss is still unclear but many smokers also often had heart disease.

Dr Dawes added: "We are not sure if toxins in tobacco smoke affect hearing directly, or whether smoking-related cardiovascular disease causes microvascular changes that impact on hearing, or both."

This means the association with smoking and hearing loss maybe under estimated, the researchers say.

Dr Ralph Holme, Head of Biomedical Research at Action on Hearing Loss, said “Hearing loss affects 10 million people in the UK and with an aging population is set to become a major public health issue.

“Hearing loss is often viewed as an inevitable consequence of aging, but as the research published today shows, this may not always be the case. Giving up smoking and protecting your ears from loud noise are two practical steps people can take today to prevent hearing loss later in life.”

The paper entitled “Cigarette smoking, passive smoking, alcohol consumption and hearing loss” is published in the Journal of the Association for Research in Otolaryngology on Thursday 29 May.

About the National Institute for Health Research
The National Institute for Health Research (NIHR) is funded by the Department of Health to improve the health and wealth of the nation through research. Since its establishment in April 2006, the NIHR has transformed research in the NHS. It has increased the volume of applied health research for the benefit of patients and the public, driven faster translation of basic science discoveries into tangible benefits for patients and the economy, and developed and supported the people who conduct and contribute to applied health research. The NIHR plays a key role in the Government’s strategy for economic growth, attracting investment by the life-sciences industries through its world-class infrastructure for health research. Together, the NIHR people, programmes, centres of excellence and systems represent the most integrated health research system in the world. For further information, visit the NIHR website.
UK Biobank Weblink: www.ukbiobank.ac.uk
Some modules are disabled because cookies are declined. Accept cookies to experience the full functionality of this page.
ACCEPT COOKIES
We use cookies to optimize the website, no personal information is stored. Learn more
DECLINE COOKIES ACCEPT COOKIES