Steven Pinker on zombie nouns and the curse of prior knowledge 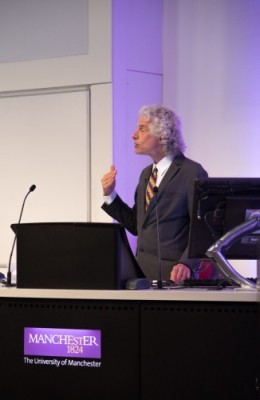 More than 550 people got the chance to improve their sense of style last night at The University of Manchester as they attended a talk by best-selling author Steven Pinker, who has featured as one of Time magazine's ‘100 Most Influential People in the World Today’.

Pinker is professor of psychology at Harvard University who has spent much of his career understanding how language works. He used his lecture to debunk some of the myths about good writing and point out common mistakes.

He warned against assuming everyone knows your subject as well as you do; the curse of prior knowledge. He also spoke out against the ‘zombie noun’, a term coined by author Helen Sword where suffixes like ‘ity’, ‘tion’ or ‘ism’ are added to an adjective or verb.

Usage advice is based on evidence - the practices of good writers now and in the past. Many supposed rules are routinely flouted by the best writers.

The lecture launched Manchester’s activities for the European City of Science 2016 and was part of the Manchester Literature Festival. Pinker drew on science, as well as great literature, in discussing his new book, The Sense of Style: The Thinking Person’s Guide to Writing in the 21st Century.

“Usage advice is based on evidence - the practices of good writers now and in the past,” he said. “Many supposed rules are routinely flouted by the best writers.”

He called out arbitrary and impractical ‘rules’ such as not splitting the infinitive, using the singular ‘they’ or dangling prepositions. – all illustrated with examples ranging from Lolcats to Barak Obama.

“There is a language war between prescriptivists and descriptivists,” he said. “I think this is a pseudo-controversy. We need a more sophisticated way of talking about rules of usage.”

The University’s Professor Dan Davis, himself the author of a best-selling book, The Compatibility Gene, hosted the event.  He said: “When you read Steven Pinker’s books, you marvel not just at the argument itself but also the way he presents his case, his writing style. In Manchester, he let us in on some of his secrets for writing so well. And we left inspired to write better ourselves.”

Pinker finished his lecture by urging the audience to read more in order to absorb the thousands of tricks and techniques a good writer needs to have at their disposal.  “Good writing begins with good reading,” he said.