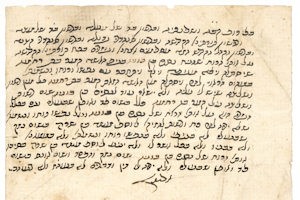 A rare – and possibly unique - text describing a Jewish exorcism has been discovered by a scholar of medieval Jewish studies.

The 150 word neatly written fragment – discovered by Dr Renate Smithuis from The University of Manchester – describes a ceremony to dispel the evil spirit of Nissim Ben Bunya from his widow, Qamar Bat Rahma.

Dr Smithuis thinks the Hebrew document was most likely written in the eighteenth century and probably originated from Egypt or Palestine.

The fragment provides what is likely to be unique evidence of the prayer ritual's actual use in a synagogue.

It is one of the 11,000 manuscript fragments held at The University of Manchester’s John Rylands Library – rescued from a 1000-year old storeroom – or Genizah – at the Ben Ezra synagogue in Cairo.

The fragment contains the second part of a prayer ritual in which the husband  - or husband-to-be  - of a widow recites an exorcism prayer, to which the other men gathered in the synagogue respond with a similar prayer.

Apparently, Qamar had been possessed by the spirit – or dybbuk – of her late husband Nissim Ben Bunya while engaged to, or just married with, Joseph Moses Ben Sarah.

In the prayer, Joseph and the rest of the congregation ask God that the ghost may be expelled from Qamar and that the new family and all their possessions may be protected from the troublesome ghost also in the years to come.

Professor Gideon Bohak from Tel-Aviv University, who has worked with Dr Smithuis -  discovered that the prayer is ascribed to the famous eighteenth-century Kabbalist Rabbi Shalom Shar‘abi.

The Arts and Humanities Research Council awarded The John Rylands Library over £ 361,000 to digitise and catalogue the Rylands Genizah in 2006.

The project – soon to be completed – provides high resolution images of the fragments on the website of The John Rylands Library for both researchers and the public. There will be at least 22,000 images.

Dr Renate Smithuis, who is based at the Centre for Jewish Studies at The University of Manchester , said: “From the second half of the sixteenth century onwards, there were lots of dybbuk stories across the Mediterranean, primarily in North Africa and Palestine.

“But this fragment is so exciting because it’s not a story, but the record of a real event using a prayer which was actually recited in a synagogue.

“The prayer was said in the presence of a minyan – the minimum number of ten adult Jews required for a communal religious service.

“We think it likely to have come from Egypt or Palestine not only because the fragment originates from the Cairo Genizah but also because Qamar (Arabic for “Moon”) and Rahma (“Mercy”) are names of Arabic origin.

”We know little more about what happened than what is contained within these 150 or so words  – but it does throw some light on this mysterious and little known side of Jewish culture.”

An image of the fragment is available.