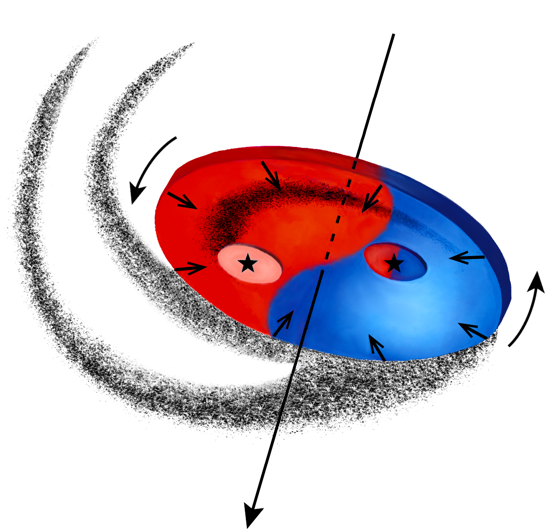 Cartoon model of the system. The red-blue colours indicate the motion of the gas. (Red – away from us, blue – towards us.) The peculiar yin-yang shape results from the combination of

Astronomers have observed primordial material that may be giving birth to three planetary systems around a binary star in unprecedented detail.

Bringing together three decades of study, an international group of scientists have observed a pair of stars orbiting each other, to reveal that these stars are surrounded by disks of gas and dust. Research published today in The Astrophysical Journal, shows the material within the newly discovered disks could be the beginnings of new planet systems which in the future orbit the binary stars.

Using the Very Large Array (VLA) and the Atacama Large Millimeter/Submillimeter Array (ALMA), the scientific group has studied the binary star SVS 13, still in its embryonic phase. This work has provided the best description available so far on a binary system in formation.

Models of planet formation suggest that planets form by the slow aggregation of ice and dust particles in protoplanetary disks around forming stars. Usually these models consider only single stars, such as the Sun. However, most stars form binary systems, in which two stars rotate around a common centre.  Very little is yet known about how planets are born around these important twin star systems, in which the gravitational interaction between the two stars plays an essential role.

"Our results have revealed that each star has a disk of gas and dust around it and that, in addition, a larger disk is forming around both stars," says Ana Karla Díaz-Rodríguez, a researcher at the IAA-CSIC and the UK ALMA Regional Centre (UK-ARC) at The University of Manchester, who leads the work.

“This outer disk shows a spiral structure that is feeding matter into the individual disks, and in all of them planetary systems could form in the future. This is clear evidence for the presence of disks around both stars and the existence of a common disk in a binary system.”

Our results have revealed that each star has a disk of gas and dust around it and that, in addition, a larger disk is forming around both stars. This outer disk shows a spiral structure that is feeding matter into the individual disks, and in all of them planetary systems could form in the future. This is clear evidence for the presence of disks around both stars and the existence of a common disk in a binary system.

The binary system SVS 13, consisting of two stellar embryos with a total mass similar to that of the Sun, is relatively close to us, about 980 light-years away in the Perseus molecular cloud allowing its detailed study. The two stars in the system are very close to each other, with a distance of only about ninety times that between the Earth and the Sun.

The work has made it possible to study the composition of gas, dust and ionized matter in the system. In addition, nearly thirty different molecules have been identified around both protostars, including thirteen complex organic molecules precursors of life (seven of them detected for the first time in this system). "This means that when planets begin to form around these two suns, the building blocks of life will be there," says Ana Karla Díaz-Rodríguez (IAA-CSIC / UK-ARC).

The scientific team has used the observations of SVS 13 obtained by the VLA over thirty years, together with new data from ALMA, and has followed the motion of both stars over this period, which has allowed their orbit to be traced, as well as the geometry and orientation of the system, along with many fundamental parameters, such as the mass of the protostars, the mass of the disks, and their temperature. Gary Fuller of The University of Manchester, a collaborator on the project, says: “This work shows how careful, systematic studies of young stars can provide a remarkably detailed view of their structure and properties.“

"At the IAA we began studying this system twenty-five years ago. We were surprised when we discovered that SVS 13 was a radio binary, because only one star is seen in the optical. Normally, stellar embryos are detected in radio, but they only become visible at the end of the gestation process. It was very strange to discover a pair of twin stars where one of them seemed to have evolved much faster than the other. We designed several experiments to get more details and to find out if in such a case either of the stars could form planets. Now we have seen that both stars are very young, and that both can form planets," says Guillem Anglada, a researcher at the Instituto de Astrofísica de Andalucía (IAA-CSIC) who is coordinating the studies of SVS 13.

SVS 13 has generated much debate in the scientific literature, as some studies consider it to be extremely young and others consider it to be in a later stage. This new study, probably the most complete study of a binary star system in formation, not only sheds light on the nature of the two protostars and their environment, but also provides crucial parameters for testing numerical simulations of the early stages of binary and multiple system formation.