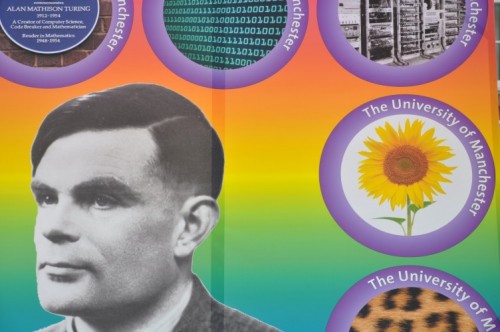 The solution to a mathematical conundrum proposed by famed University of Manchester mathematician Alan Turing has been finally proved, 60 years after his death.

Today, the findings of a major citizen science project, Turing’s Sunflowers, are being published in the open journal, Royal Society Open Science. This innovative project, which involved members of the public as well as scientists, built on work which was started by the mathematician before his death in 1954. The findings reveal new mathematical patterns found in the spirals of sunflower heads.

From 1948 until his death, Turing worked at The University of Manchester.

During the project, thousands of sunflowers were planted in honour of the mathematician Alan Turing as part of a research project led by the Museum of Science and Industry in Manchester and the Manchester Science Festival and co-authored by Dr Erinma Ochu from The University of Manchester .

A hundred years after Turing was born, thousands of families, schools and growers from Manchester, the UK and around the world, got involved in the project to create the largest study of its kind. Over 500 sunflowers were analysed as part of the experiment, to celebrate Turing’s work and help solve a mathematical riddle that he worked on before his death in 1954.

Alan Turing is famous for his code-breaking skills, which helped to crack the Enigma Code during the Second World War, and as a founder of computer science and artificial intelligence, but later he became fascinated with the mathematical patterns found in stems, leaves and seeds - a study known as phyllotaxis. The spirals on sunflower heads often conform to a Fibonacci number (see notes), and Turing was one of a number of scientists who tried to explain ‘Fibonacci phyllotaxis’, but he died before the work was complete.

This experiment enabled the study authors, Professor Jonathan Swinton and Dr Erinma Ochu, to analyse sunflower heads to test the extent to which they follow the Fibonacci rule.

The findings back up the work that Turing carried out before his death. However, this citizen science experiment also builds upon his work, as the data submitted by growers reveals other types of patterns in the sunflower spirals that are not Fibonacci.

Sunflowers showing beautiful examples of the spiral patterning but no Fibonacci numbers are reported. It is these exceptions to the rule which are particularly interesting topics for future investigation. The data is now available to create new mathematical models to explain how these different number patterns occur in nature.

We are really proud that this experiment has now been published and people can download the paper and see their contribution. This work is helping to grow Alan Turing’s legacy and inspire people around the world to get excited about maths and science

Professor Jonathan Swinton, a computational biologist, and the lead researcher, said: “This citizen science experiment has built on the work of Alan Turing and others and taken it further – the challenge to mathematicians now is creating models that take into account the full range of patterns, including the non-Fibonacci patterns that we have discovered in this dataset. We couldn’t have done this experiment without the contributions from growers all over the world”.

Dr Erinma Ochu, co-author and citizen science expert at The University of Manchester said: “We are really proud that this experiment has now been published and people can download the paper and see their contribution. This work is helping to grow Alan Turing’s legacy and inspire people around the world to get excited about maths and science.”

Professor Russell Foster, Chair of The Museum of Science and Industry and Fellow of The Royal Society said: 'It is incredibly important and fitting that the museum is driving forward initiatives like citizen science. This is excellent science undertaken by the public in collaboration with researchers and science communicators. The valuable knowledge being discovered by these projects contributes to the overall body of scientific knowledge and such collaborations represent an exciting new way for science to advance”.

For more information look up www.turingsunflowers.com

For further information and images contact Kate Campbell-Payne, Communications Officer, Museum of Science and Industry on 0161 606 0176, or email kate.campbell-payne@msimanchester.org.uk