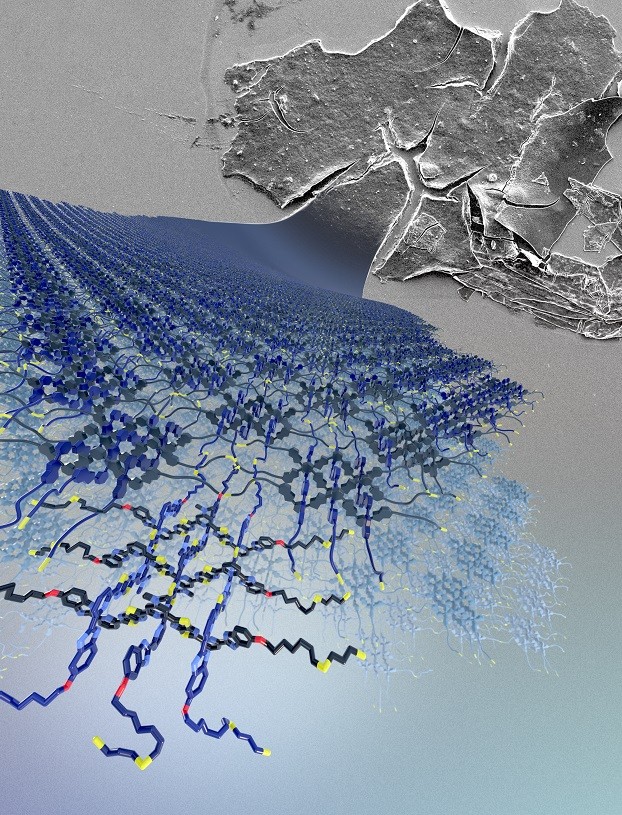 A team of scientists from The University of Manchester have been honoured with the Guinness World Record for weaving threads of individual molecules together to create the ‘world’s finest fabric’, overtaking finest Egyptian linen.

The weaving of threads having diameters ranging from several millimetres (reeds, plant fibres, etc.) to a few microns (wool, cotton, synthetic polymers, etc.) has underpinned progress through the ages, from stone-age humans making nets to catch fish and weave cloth to keep themselves warm to the modern textiles we all use every day.

Now, for the first time, a team of scientists at The University of Manchester have developed a way to weave molecular threads in two-dimensional layers. In doing so they have produced a 2D-molecularly-woven fabric that has a thread count of 40-60 million (for comparison, the finest Egyptian linen has a thread count of around 1500 – thread count is the number of strands per inch).

Weaving has many applications, for birds who weave twigs to build their nests, and humans who use it to make nets for fishing, baskets to carry things in, and fabrics to clothe ourselves. Plastics are made of long molecular strands called polymers, and the research team wanted to find a way of weaving those strands to make molecularly woven fabrics which could have exceptional strength and flexibility in the same way as linen sheets differ from individual threads of cotton.

The collaborative team used chemistry to weave the strands. Metal atoms and negatively charged ions work in tandem to weave together small molecular building blocks made of carbon, hydrogen, oxygen, nitrogen and sulfur atoms. The woven building blocks then join together like pieces of a jigsaw to form single sheets of woven molecular strands in a fabric just 4 millionth of a millimetre thick (4 nanometres). At the moment the largest piece of fabric made is just 1 mm in length. Obviously that’s extremely small, but it’s actually larger than the first flakes of graphene when that was first made.

Professor David Leigh said: “Weaving molecular strands in this way leads to new and improved properties. The fabric is twice as strong as the unwoven strands and when pulled to breaking point it tears like a sheet rather than clumps of strands detaching. The woven material also acts like a net, allowing small molecules to pass through it while trapping larger molecules in the tiny mesh.

Weaving molecular strands in this way leads to new and improved properties. The fabric is twice as strong as the unwoven strands and when pulled to breaking point it tears like a sheet rather than clumps of strands detaching. The woven material also acts like a net, allowing small molecules to pass through it while trapping larger molecules in the tiny mesh.

“This is the first example of a layered molecularly woven fabric. Weaving molecular strands offers a new way of altering the properties of plastics and other materials.

“The number of strands and strand-crossings was measured by shining X-rays on the building blocks. The strands bend the path of the X-rays through the material by a specific amount, enabling researchers to measure how many strands there are per inch. The measurement shows the material has a thread count of 40-60 million strands per inch. In comparison, the finest Egyptian linen has a thread count of around 1500. The team also measured the thickness of the molecularly woven fabric using a special instrument called an atomic force microscope, which has a probe tip so sharp that it has a single atom at the end. Each layer of the molecularly woven fabric is just 4 nanometres thick; that’s 10,000x thinner than a human hair!”

The research was reported in: ‘Self-assembly of a layered two-dimensional molecularly woven fabric’ in the journal Nature. The team behind the work involved four different research groups from across the University. Professor David Leigh’s team from the Department of Chemistry made the molecularly woven fabric. Professor Bob Young’s team from the Department of Materials and Henry Royce Institute carried out atomic force microscopy studies to determine its structure and material properties.

Dr George Whitehead from the Department of Chemistry carried out X-ray crystallography experiments to locate the precise position of atoms in the material’s building blocks. Professor Sarah Haigh from the Department of Materials, used electron microscopy to image the molecularly woven fabric. PhD student Paige Kent and Professor Rob Dryfe used the material as a molecular net, trapping big molecules in the woven mesh while smaller molecules passed through freely.