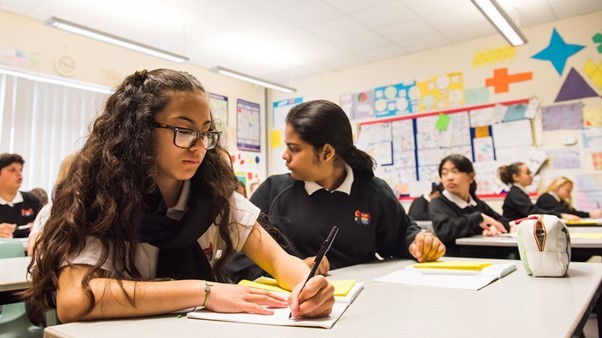 Most young people in the UK experience a sharp decline in their wellbeing during their first years at secondary school regardless of their circumstances or background, according to new research published in the British Journal of Developmental Psychology.

Academics from the Universities of Manchester and Cambridge analysed the wellbeing and self-esteem of more than 11,000 young people from across the UK, using data collected when they were 11 and again when they were 14.

While most adolescents were satisfied with life at age 11, the majority were extremely dissatisfied by age 14. By that age, the ‘subjective wellbeing’ scores of 79% of participants fell below what had been the average score for the entire group three years earlier.

The study also captured information about the adolescents’ satisfaction with specific aspects of their lives, such as schoolwork, personal appearance, family and friends - this suggested that the most dramatic downturns between 11 and 14 were probably related to school and relationships with peers.

It is widely accepted that young people’s wellbeing and mental health are influenced by factors such as economic circumstances and family life. The research shows that notwithstanding this, wellbeing tends to fall steeply and across the board during early adolescence.

That decline is probably linked to the transition to secondary school at age 11. The study identified that the aspects of wellbeing which changed in early adolescence were typically related to school and peer relationships, suggesting a close connection with shifts in these young people’s academic and social lives.

In addition, students with higher self-esteem at age 11 experienced a less significant drop in wellbeing at age 14, which indicates that structured efforts to strengthen adolescents’ self-esteem - particularly during the first years of secondary school - could mitigate the likely downturn in wellbeing and life satisfaction.

The researchers identify various ways in which schools could support this, suggesting that celebrating students’ achievements, underlining the value of things they had done well and avoiding negative comparisons with other students could all help.

Adolescents’ wellbeing is in decline, and in the UK, the Children’s Society has shown that 12% of young people aged 10 to 17 have poor wellbeing.

Until now, we haven’t fully understood how universally poor wellbeing is experienced, and the relationship between wellbeing and self-esteem has also been unclear.

“Even though this was a large, diverse group of adolescents, we saw a consistent fall in wellbeing,” said Ioannis Katsantonis from the University of Cambridge. “One of the most striking aspects was the clear association with changes at school. It suggests we urgently need to do more to support students’ wellbeing at secondary schools across the UK.”