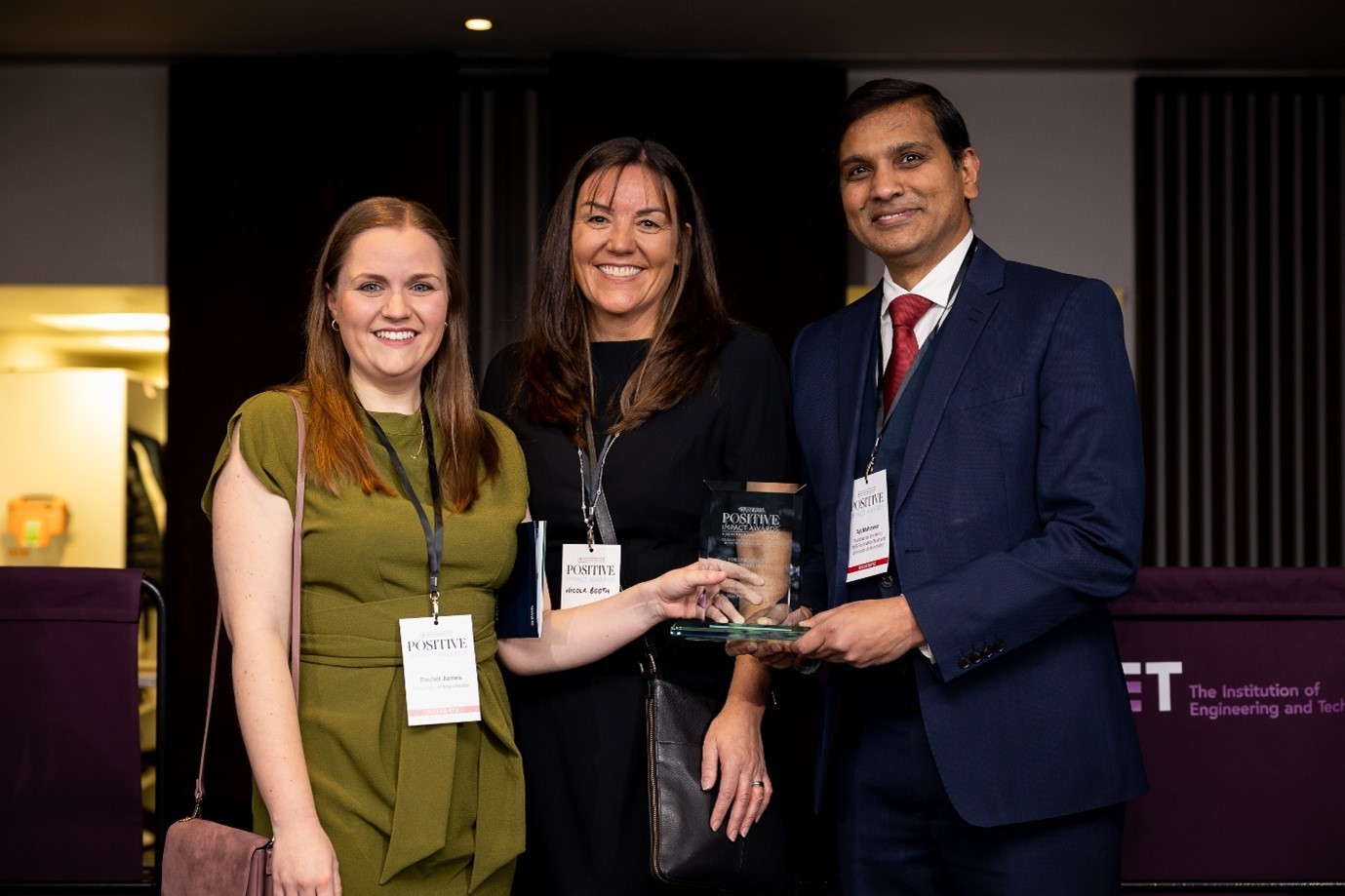 A team who led the research for a world-first genetic test that could save the hearing of hundreds of babies each year, has won the New Statesman Positive Impact in Healthcare Award 2022.

Manchester researchers, based at Saint Mary’s Hospital, part of Manchester University NHS Foundation Trust (MFT), worked with The University of Manchester and Manchester-based firm genedrive Plc on the Pharmacogenetics to Avoid Loss of Hearing (PALOH) study. Together, they developed the pioneering, rapid bedside genetic test which was piloted earlier this year.

Using a cheek swab, the test can identify in 26 minutes whether a critically ill baby admitted to intensive care has a gene change that could result in permanent hearing loss if they are treated with a common emergency antibiotic, Gentamicin.

While Gentamicin is used to safely treat approximately 100,000 babies a year, one in 500 babies carry the gene change that can lead to permanent hearing loss when given the antibiotic.

The new test means that babies found to have the genetic variant can be given an alternative antibiotic within the ‘golden hour’ and could save the hearing of 200 babies in England every year.

PALOH study lead, Professor Bill Newman, Consultant in Genomic Medicine at MFT and Professor of Translational Genomic Medicine at The University of Manchester, said: “I am delighted for the team to receive this recognition of their fantastic efforts and their innovative approach in bringing this test to fruition.”

The new swab test technique, which was piloted at MFT, replaces a test that traditionally took several days and is the first use of a rapid point of care genetic test in acute neonatal care.

Dr Mahaveer said: "I am incredibly proud to be part of the team who made this study a reality and to be recognised at this year’s New Statesman Positive Impact Awards. It’s an honour to accept the award on behalf of the team, knowing the work we have put into delivering this research will truly make a difference to hundreds of babies’ lives each year.

“As a doctor dealing daily with infection, my main concern was how easy and quickly the test was to conduct, as it’s important that we do not delay antibiotic treatment. Our experience of using this test has been very positive. It’s straight-forward, non-invasive and will have a huge impact on our patients’ lives.”

Professor Newman, Theme Co-Lead Lead for Rare Conditions, National Institute for Health and Care Research, Manchester Biomedical Research Centre, continued: “I am absolutely thrilled with the success of the study and that this test is now being used in routine clinical practice. This test will make a real difference, helping to ensure babies are not going to lose their hearing for a preventable reason.”

It is expected the test could save the NHS £5 million every year by reducing the need for other interventions, such as cochlear implants.

Professor Dame Sue Hill, Chief Scientific Officer for England and Senior Responsible Officer for Genomics in the NHS said: “This ground-breaking bedside test for detecting whether an antibiotic could cause deafness in babies in intensive care is another example of how the NHS is harnessing the power of genomic medicine to transform patient care. This award is a tribute to the hard work of Professor Bill Newman and his team in Manchester.”

Dr Gino Miele, R&D Director, genedrive plc, said: “The collaboration of our company with the research and clinical team at MFT is a shining example of the NHS working with a commercial company to deliver real improvements in patient outcomes in a cost-effective way.”