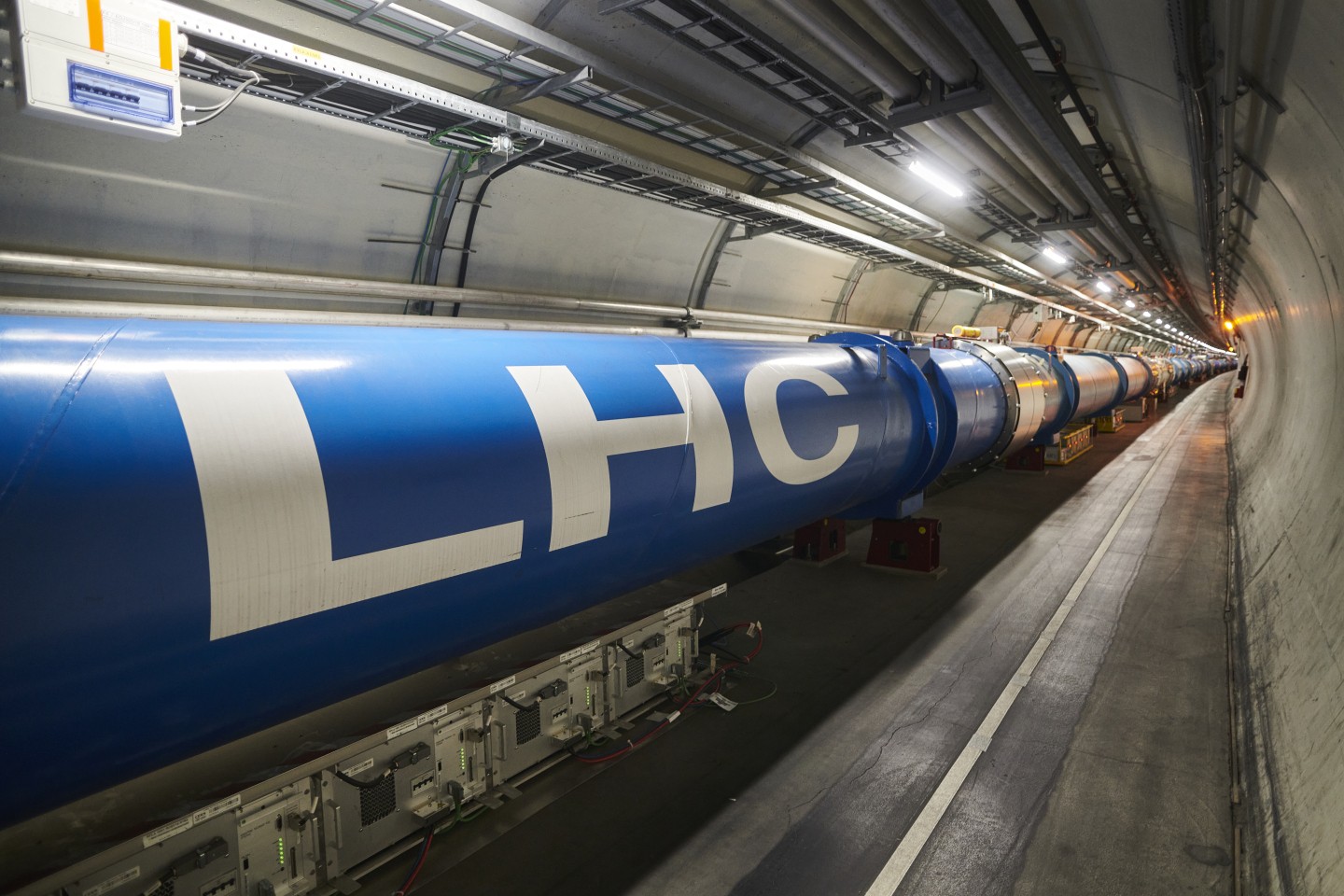 The world’s most powerful particle accelerator is ready to start delivering proton collisions to experiments at a record-breaking energy level after three years of upgrade and maintenance work.

The Large Hadron Collider (LHC) at CERN is now equipped with new detector systems and enhanced data acquisition and computing structures which are now all operational.

Today (July 5) marks the start of the accelerator's third run of data-taking for physics at the facility on the French-Swiss border, near Geneva.

Staff and PhD students in the Particle Physics Group at The University of Manchester play a central role in both the ATLAS and LHCb experiments (two of the four experiments collecting data from the LHC) from research and development of cutting-edge particle detectors for these experiments to multiple leadership roles in international research groups.

Professor Chris Parkes from The University of Manchester currently serves a three year term as Spokesperson of the LHCb experiment and said: “We are excited to see the research, development and construction efforts from the past 15 years turn into measurements of unprecedented precision. These will enable us to test the Standard Model of particle physics in unprecedented ways but they will surely also lead to surprising and unexpected discoveries.”

Ten years since the discovery of the Higgs Boson particle was announced to the world, the LHC is today moving ahead to the next stage of fundamental physics experimentation to help humanity’s understanding of the fundamental particles and forces that govern the Universe. Using the upgraded machine, it is hoped that the LHC experiments will provide new insights into the dominance of matter over antimatter and the nature of dark matter.

The beam began circulating in April, after years of upgrades and maintenance work to make it even more powerful. The LHC machine and its injectors had previously been recommissioned to operate with new higher-intensity beams and increased energy.

Beam operators have now announced the beam is stable and ready to start taking data to be used for science. The LHC will now run around the clock for close to 4 years at the record energy of 13.6 trillion electronvolts (TeV).

We are excited to see the research, development and construction efforts from the past 15 years turn into measurements of unprecedented precision. These will enable us to test the Standard Model of particle physics in unprecedented ways but they will surely also lead to surprising and unexpected discoveries.

As part of the international effort, UK teams have led a series of vital work packages to improve the performance of each of the LHC’s four main instruments, as well as work on the beam itself.

The UK’s contributions to the upgrade are worth more than £25 million, funded by the Science and Technology Facilities Council (STFC).

Professor Mark Thomson, STFC Executive Chair and particle physicist, said: “The hard work of many highly-skilled scientists and engineers in the UK has been vital to get to this point.

“Today’s news is just the beginning of an exciting few years, as physicists at CERN harness the power of the upgraded machine and vast detectors to push the frontiers of knowledge. Time will tell whether the LHC and its detectors, with their improved capabilities, can provide a first glimpse of physics beyond our current understanding.”

The four big LHC experiments have performed major upgrades to their data readout and selection systems, with new detector systems and computing infrastructure.

The changes will allow them to collect significantly larger data samples, with data of higher quality than in previous runs. The ATLAS detector expects to record more than double the data during Run 3 than in the two previous physics runs combined. The LHCb experiment underwent a complete revamp, including Manchester-built modules for the VELO detector at the heart of the experiment, and looks to increase its data-taking rate by a factor of 5.

The University of Manchester is also leading on the UK’s contribution to the LHC’s luminosity upgrade (HL-LHC-UK), which will significantly increase the collision rate to discover new particles and make more precise measurements. While Phase 1 of HL-LHC-UK is just finishing, Phase 2 is due to complete in 2026 and involving nine UK institutions. The spokesperson for the project is Professor Rob Appleby from The University of Manchester and the Cockcroft Institute, “The luminosity upgrade of the Large Hadron Collider is an exciting path to unlock a greater understanding of fundamental physics,” he said.

“The UK is proud to be contributing significant hardware through the project HL-LHC-UK. Both projects deliver hardware to the upgrade, including crab cavity cryostats, diagnostics and cold powering and simulations of performance.”

Thanks to the UK’s subscription to CERN, managed through STFC, UK physicists will have the chance to use the LHC to try to address fundamental questions, such as the origin of the matter-antimatter asymmetry in the universe, the nature of dark matter, and will study the properties of matter under extreme temperature and density.

Scientists will also be searching for candidates for dark matter and for other new phenomena, either through direct searches or – indirectly – through precise measurements of properties of known particles.