Young women across Western Europe and Canada are more left wing than their male counterparts, according to new research I carried out that also shows among older voters women more likely to be right wing than men.

We already know that younger people are often more likely to vote for left-wing parties than their older peers, but it seems this trend is particularly pronounced among women. Younger women are the most left wing in their voting habits and older women the most right wing when we compared voters by age and gender. This is shown in a study using data on over 40,000 people from the World Values Survey/European Values Study in Western Europe and Canada, 1989-2014. 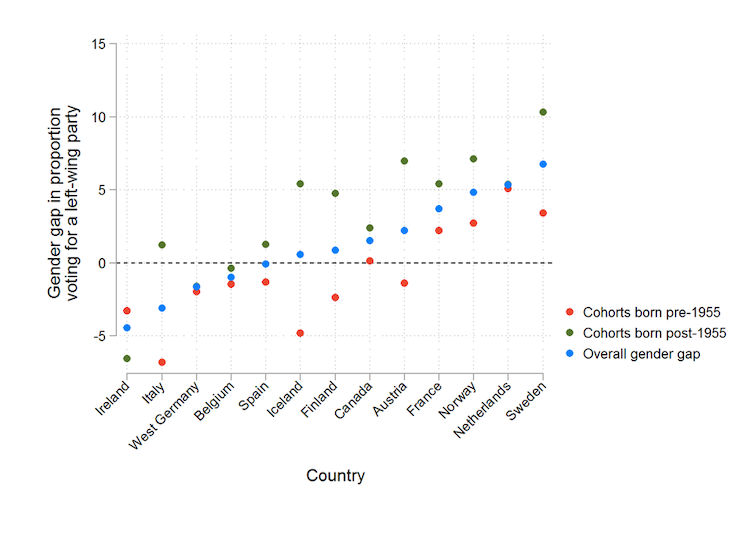 The research also showed that the gender gap in left-wing voting became larger for each new birth cohort. So, for example, the difference between women and men in left-wing voting was even greater for those born 1975-85 than it was for those born 1965-75. This suggests that over time we should expect women to become more and more left wing relative to men, as younger, more left-wing cohorts of women replace older, more right-wing cohorts in the population. 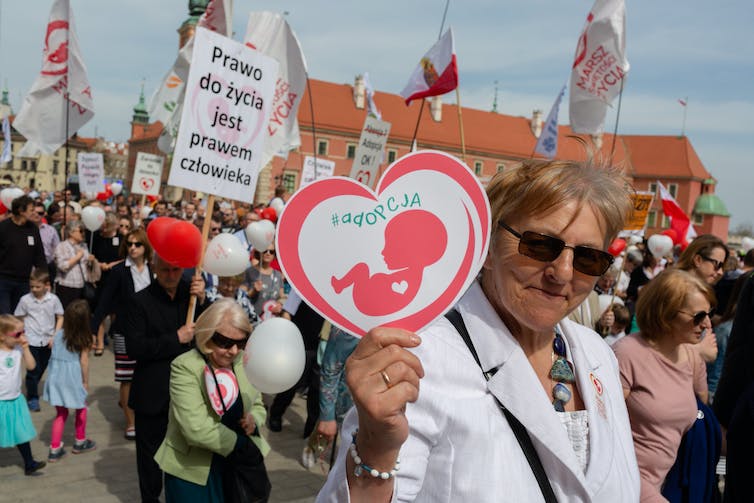 A woman takes part in a march for family values in Poland. EPA

The analysis shows that the decline of religiosity is crucial to explaining the trend. Older women are more religious and their religiosity is also more important for their vote choice compared to younger women. Religious voters are more likely to hold conservative social values and attachments to religious parties. This means that older women are more likely to vote for parties on the right – especially Christian democrat parties. Similarly, they are less likely to vote for parties on the left.

Parties often make particular efforts to appeal to “women voters” when campaigning. However, this analysis shows that there are considerable differences between younger and older women in their voting preferences. Appealing to the “women’s vote” might make less sense than, say, appealing to young women or older women.

This is a challenge for both left- and right-wing parties. Conservative and Christian democratic parties have historically had strong support among religious women, who are concentrated in older generations. However, this is now a cause for concern. Although older voters are more likely to turn out to vote than younger voters, the religious older generations are also becoming a smaller proportion of European electorates through generational replacement. Older generations die out and are replaced with new, secular ones. With an ageing support base and a decline in religiosity especially for women, Conservative or Christian democratic parties may no longer be able to rely on their traditional positions or messages.

Left-wing parties, especially Social democratic ones, need to think about whether their younger women supporters will stick with them as they age. If they do, this perhaps offers hope for these parties. As their traditional support base of the working class declines in size, they might find a new one in the form of younger cohorts of women.

However, in the intervening period, these left-wing parties will face a challenge of balancing the different values and priorities of their traditional base – older, working class men – and their new supporters – younger cohorts of women. Both left-wing and right-wing parties may have to start reexamining how they appeal to female voters.