The Peterloo Massacre was a defining moment in Manchester’s history. Two centuries later, the University’s John Rylands Research Institute and Library tells the story in its latest exhibition.

"It was a hot day in August 1819 when people from across Greater Manchester crowded into the city to protest against poverty and political inequality,” explains Dr Janette Martin, lead curator of Peterloo, an exhibition marking the 200th anniversary of this dark day in Manchester’s history.

“They came to hear Henry Hunt, a radical landowner and politician, speak about parliamentary reform, but also to put on their Sunday best and walk into the city with their families, children and sweethearts.”

What began as a peaceful protest for political representation quickly turned to terror, as the city’s magistrates ordered armed soldiers to rush into the 60,000-strong crowd and arrest Hunt.

“It’s disturbing to think that mounted soldiers chased people down Deansgate, where the Library now stands,” Dr Martin explains. “They weren’t just clearing the field, they were persecuting people – the items we have on display really bring that home.”

Manchester’s people were part of a movement that couldn’t be stopped.

As the John Rylands Research Institute and Library’s Modern History Archivist, Dr Martin is used to delving through collections spanning languages, cultures and time periods. However, curating the Peterloo exhibition narrowed her focus to an event that unfolded just streets away from where the Library now stands.

Featuring handwritten records, historic books, original newspapers, handbills and engravings, the exhibition is the result of Janette’s extensive research into the Library’s uniquely rich collection of items related to Peterloo.

Dr Martin recalls her first encounter with the Relief Fund Account Book, which records compensation given to victims and their families after the massacre. “I found it so shocking and upsetting to read the names of people who were wounded by sabres, trampled by horses, or thrown down to the ground on that day,” she says.

“It’s powerful because it tells the story at the level of the individual. It’s easy to visualise these people, and imagine what these events meant to them.

“Estimates vary, but something like 15 people were killed that day, and around another three or four died from their injuries in the days after.

“I often think of Peterloo when I walk through Manchester today.”

The exhibition is one of a range of events the city of Manchester will hold in 2019 to remember Peterloo. The Library’s exhibition and associated public events programme runs from 21 March to 29 September, alongside city-wide cultural commemorations led by University-based charity Manchester Histories.

The high-profile activity around the anniversary includes the unveiling of a new public memorial by Turner Prizewinner Jeremy Deller. For Dr Martin, the bicentenary can finally correct a 200-year-old wrong. “Peterloo hasn’t been commemorated widely, and it’s important that we redress that,” she asserts.

As well as painting a vivid picture of the day’s devastating events, the exhibition illustrates Manchester’s radical heritage of protest against injustice. Today, The University of Manchester remains unique in higher education for holding social responsibility as a core goal, with global inequalities as one of its research beacons.

“However horrible Peterloo was, it played a crucial part in Britain’s battle for democracy,” says Dr Martin.

“Manchester’s people were part of a movement that couldn’t be stopped. I want our visitors to know that and be proud of it.”

Find out more about the John Rylands Research Institute and Library.

Social responsibility is one of the University's core goals.

World War I remembrance / Between the lines 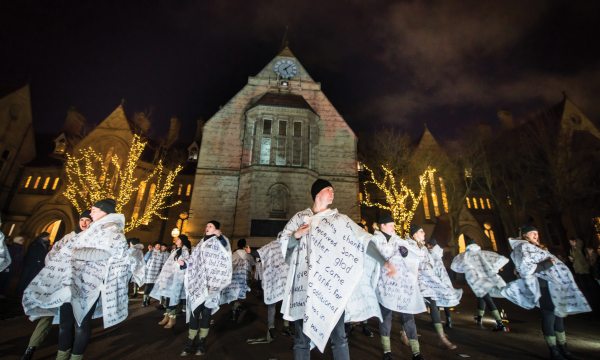