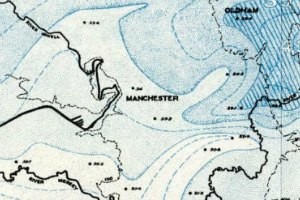 An innocuous council planning report from 1926 which contained a rain map of the region is partly to blame for Manchester’s rainy image, says a University of Manchester researcher.

The report is one of eight spanning 40 years of Mancunian history published by Manchester Corporation  and digitised by a team led by geographer Dr Martin Dodge.

In a collaboration between The University of Manchester and Manchester City Council, with funding from Manchester Statistical Society,  it is the first time such a comprehensive collection of planning documents from a UK city have been made freely available online.

Containing dozens of survey maps and plans of schemes - some built, but much unrealised - they provide a unique record of how the authorities tried to tame 100 years of uncontrolled growth in the UK’s first industrial city.

The 1926 report produced by the “Manchester and District Joint Town Planning Advisory Committee”, covering a 100 different local authorities, was the most  comprehensive survey of the area to date.

Widely covered by the media of the time, the rain map depicted a damp Manchester and a soaked through Bolton, Bury, Rochdale and Oldham.

It had been produced by H.W. Ogden for the Committee of influential planners and officials.

Dr Dodge said: “We take for granted that the British have always seen Manchester as its rainiest city, but in the 1920s this wasn’t necessarily the case.

“In fact, this is clearly a myth: just this January, the Met Office showed that far from being the UK’s rainiest city, our city is one of the driest.

“So the perception must have come from somewhere and this compelling map might at least partly explain it, though its intention was merely to describe the physical landscape of the region as part of a survey.”

Councillor Rosa Battle, Manchester City Council’s Executive Member for Culture and Leisure, said: "We're always mystified when people make the strange claim that it always rains here.  Of course the truth is that our annual rainfall is below the UK average - and always has been.

“Digitising this rich collection of maps and reports so that people can view them for free online is a great way of bringing the city’s rich history to life."

The eight digitised reports are available via

The rain map is available.

Dr Dodge is available for interview