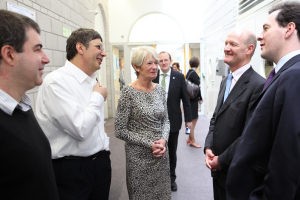 The University of Manchester welcomes the £50m investment announced today by the Chancellor of the Exchequer George Osborne into graphene, the world’s thinnest, strongest and most conductive material.

At a visit this morning to the University laboratories where the material’s remarkable properties were first demonstrated, the Chancellor laid out his plans for the creation of a Graphene Global Research and Technology Hub to commercialise graphene, part of almost £200m investment into science.

The Chancellor, along with Universities and Science Minister David Willetts, spoke to Professor Andre Geim and Professor Kostya Novoselov, who discovered graphene at The University of Manchester in 2004 and were awarded the 2010 Nobel prize in Physics almost a year ago today.

Graphene, a novel two-dimensional material which can be seen as a monolayer of carbon atoms arranged in a hexagonal lattice, is one of the world’s most versatile materials. Its potential applications include touchscreen mobile phones, lighter aircraft wings, superfast internet connections and transistors.

Since the discovery, Professors Geim and Novoselov have continued to carry our world-class research, including into the potential applications of graphene.

In his speech to the Conservative Party Conference in Manchester, Mr Osborne said: “Tomorrow’s world is being shaped here in Manchester. Manchester, the first City of the Industrial Revolution. The city where the first computer was built. Where Rutherford split the atom.

“Manchester, home to the two brilliant scientists I met this morning who have just been awarded the Nobel Prize for Physics.

“Their prize was for the discovery of a substance called graphene. It’s the strongest, thinnest, best conducting material known to science, to be used in everything from aircraft wings to microchips.

“The inventors could have gone anywhere in the world to do their research. But they chose The University of Manchester.

“…We will fund a national research programme that will take this Nobel-prize winning discovery from the British laboratory to the British factory floor…We’re going to get Britain making things again.”

The development of the Hub will capitalise on the UK’s international leadership in the field. It will act as a catalyst to spawn new businesses, attract global companies and translate the value of scientific discovery into wealth and job creation for the UK.

The centre would help develop the technology to allow manufacture on a scale that would open up the promising commercial opportunities, incorporating a large doctoral training centre and advanced research equipment.

A full business case is being developed by the Engineering and Physical Sciences Research Council (EPSRC) in partnership with the Technology Strategy Board (TSB). Work leading to the award of the Nobel prize was funded by EPSRC long before the applications were realised.

Professor Dame Nancy Rothwell, President and Vice-Chancellor of The University of Manchester, said: “We were delighted to host a visit this morning from the Chancellor of the Exchequer and the Minister for Universities and Science who visited our graphene research facility and chatted with our Nobel laureates, Andre Geim and Kostya Novoselov about this very exciting investment in graphene.

“It is extremely important that the UK government clearly recognises the importance of investment in science as an economic driver.

“Graphene is one of the most important scientific advancements in recent times. We are proud of the world-class research carried out here and to have that recognised by the Government is a real vindication of the work we do.

“As the UK’s leading centre for graphene research, we look forward to the creation of the Graphene Hub which will help to stimulate the economy, create jobs and new business opportunities.”

Professor Geim said: “Technology is the engine of the economy, and science is the petrol to keep this engine running. The state of the global economy is in such a mess that its engine requires urgent repairs. Unfortunately, not only we run out of the petrol (by practically exhausting the previous scientific knowledge) but we also run out of money to buy new petrol.

“It is important that this Government realizes the fundamental importance of science and, even in this economic climate, finds the extra money to get the economy a mile closer to the next petrol station.

“I do appreciate that the Chancellor has found time to visit the University. My impression is that he tries to look 10 or 20 years ahead to position this country well in the increasingly competitive and technology-driven world.

“The University of Manchester has been at the forefront of graphene research since 2004 and we plan to be there for a long time to come.”

Professor Novoselov said: “With the enormous interest this material has already generated around the world, we expect to be able to convert our world-leading research expertise into real technologies.

“The Research Hub will certainly allow us to explore deeper into the vast applied potential of graphene, but also will lead to many new exciting results, continuing the scientific excellence in the UK.”

Images of this morning’s visit are available on request from the Press Office.

University members of staff are available for interview on request.