A book 100 years older than the Magna Carta goes digital 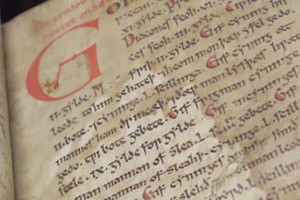 A manuscript predating the Magna Carta is to be seen, in full, online, by the public for the first time thanks to a project involving digital experts at The University of Manchester working in partnership with Rochester Cathedral.

The Textus Roffensis, a 12th century legal encyclopaedia compiled by a single scribe at Rochester Cathedral, in Kent, in the 1120s has been digitised by the University’s Centre for Heritage Imaging and Collection Care.

The medieval manuscript, which is almost 100 years older than King John’s Magna Carta and has been described as ‘Britain’s Hidden Treasure’ by the British Library, has never before been seen in its entirety by the public.

The University of Manchester’s Centre for Heritage Imaging and Collection Care provides specialist and bespoke solutions for the digitisation and collection care of heritage and cultural collections.

Dr Chris Monk, a specialist at the University who worked with Rochester Cathedral on the project, said: “The team here has vast experience digitizing rare books and manuscripts.  To work with this particular national treasure, one of such historical significance, has been remarkable.  And it will be just as exciting and remarkable for the public to see it up close – no longer a hidden treasure.

“The Textus Roffensis is truly a unique manuscript: it predates the Magna Carta by almost a hundred years, contains the only copy of the oldest set of laws in English, and was penned by an English scribe within 60 years of the Norman Conquest.  That it is being made accessible to the public is worth shouting about, and is a tribute to all those involved with the project.

Written in Old English and Latin in 1123-24 AD, the Textus Roffensis is so called because of a 14th century inscription within the book, The Textus de Ecclesia Roffensi per Ernulphum episcopum (The Book of the Church of Rochester through Bishop Ernulf). It contains the Law of Aethelberht of Kent which dates back to 600AD – it is the only surviving copy of the oldest law in English.

The book was originally two manuscripts. The first has the only surviving copies of three Kentish laws, including the Law of Aethelberht who was the King of Kent, from 560 to 616AD, and seen by some as ‘foundation documents of the English state’. King Alfred’s Domboc (book of laws) and King Cnut’s laws are also in this section of the book alongside the oldest copy of the coronation charter of Henry I - the wording of which is echoed in the Magna Carta (1215) and the American Declaration of Independence (1776).

The second part of the manuscript includes the earliest charters of England’s second oldest cathedral – founded at Rochester in 604AD, the oldest known catalogue of books in England and documents concerning the Danish conquest of England in 1016.

A number of pages in the manuscript display signs of water damage after it became submersed, possibly, in either the River Medway or the River Thames, sometime between 1708 and 1718, when it was being returned by boat to Rochester from London.

The early legal codes are concerned primarily with preserving social harmony, through compensation and punishment for personal injury. Compensations are arranged according to social rank, descending from king to slave. The initial provisions of the code offer protection to the church. Though the latter were probably innovations, much of the remainder of the code may be derived from earlier legal custom transmitted orally.

The Textus Roffensis has been safeguarded by Rochester Cathedral since its inception and has been digitised by The University of Manchester team as part of a Heritage Lottery Funded renovation and community engagement project at the Cathedral.

The Textus Roffensis itself will go on display in Rochester Cathedral next year, as part of the Cathedral’s Heritage Lottery Fund project, ‘Hidden Treasures: Fresh Expressions’, and will enable public access to its remarkable library and other collections and include exhibitions, workshops, events and activities.

Interview and filming requests can be made through the University’s press office. Images of Textus Roffensi’ are available and interviews can be arranged with Dr Chris Monk from The University of Manchester, Canon Dr Philip Hesketh and Armand De Filippo from Rochester Cathedral.

A link to download a film about Textus Roffensis will be sent on request.

The newly digitised version of Textus Roffensis is being unveiled for the first time at Rochester Cathedral on Wednesday 5th November 2014 at 7pm. Canon Dr Philip Hesketh will give a welcome and introduction to the text and the digitization of the Textus Roffensis will be explained by Gwen Riley Jones and Carol Burrows of The Centre for Heritage Imaging and Collection Care at The John Rylands Library (part of The University of Manchester). Dr Chris Monk will explore this book, so full of national and local drama, in his talk at the launch event.

Funding for the digitisation project was provided by the Heritage Lottery Fund.