A dose of antibiotics awareness with University school visit project 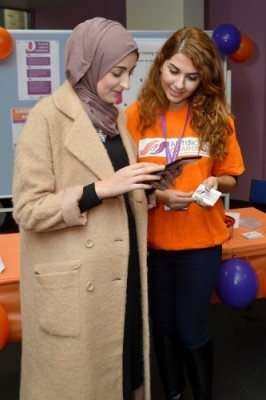 An antibiotic awareness event on campus

As part of World Antibiotic Awareness Week (14-20 November), The University of Manchester has announced a new programme of visits to local primary schools to spread the message about using these medicines in a way that helps prevent the serious problem of bacteria becoming resistant to them.

They are also supporting the Global Health Society to spread the message about this crisis.

Humanity and the wider environment is in the ‘pre-antibiotic era’, with the natural process of bacteria evolving to resist antibiotics – and this has been speeded up because many people get antibiotics when they don’t need them (in some countries they can just buy from their corner shop), and even in the UK, people commonly fail to take their full prescription without realising this adds to antibiotic resistance.

Another major threat comes from the massive use of antibiotics in agriculture. With a lack of new antibiotics in development, this problem is already causing longer hospital stays and increased difficulty in treating illnesses such as pneumonia and tuberculosis. Ultimately it is now known to be causing millions of deaths around the world, including in the UK.

Without effective antibiotics, organ transplantations, chemotherapy and surgery such as caesarean sections become much more dangerous. Already, 25,000 people a year die across Europe from infections resistant to antibiotics.

Lydia Bagg, a fourth year medical student said: “Working with young children is a fantastic opportunity to get them to think about different medicines. We’ll be using games and quizzes to give simple messages about reducing the spread of germs and reducing antibiotic resistance.”

The school visits are not the only activity planned by the University. Dr Roger Harrison, Senior Lecturer in Public Health, has formed a partnership with two prominent student societies: the Global Health Society and the Medics in Primary Schools society.

Working with the GHS, on Thursday, 17 November, members of the public are invited to attend an open evening of presentations, where local, national and international experts on subjects relating to antibiotic resistance will be presented.

Clarissa Hemmingsen, first year medical student and President of the Global Health Society said that: “Interest in this week’s event is overwhelming –it’s a brilliant way for the public and students to learn about antibiotic resistance and differences in other countries.”

The event features leading experts from Thailand, the US, and in the UK from London, Oxford and closer to home in Manchester.

Dr Harrison said: “This work all about getting the message out to people; that around the world we’ve have turned to antibiotics too often, and even used them when science shows it’s impossible for them to help, such as with a basic cold.”

He went on to say how: “There are thousands of students coming to Manchester every year – so it’s not only the public we’re concerned about. Using support from the student societies is brilliant and makes links across different degree courses too.”

Antibiotic resistance: What can I do?

A dose of antibiotics awareness with University school visit project