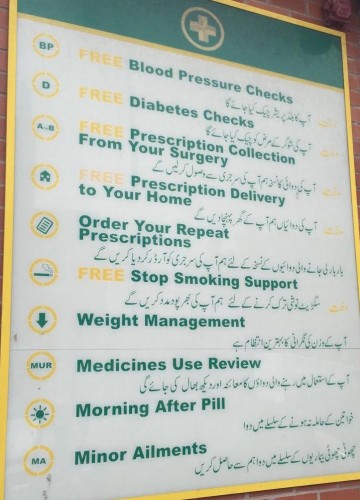 Access to interpreter and translation services is an essential requirement to ensure integration – according to a new study carried out by a team from The University of Manchester’s Multilingual Manchester project, in collaboration with the NHS Clinical Commissioning Groups for Manchester.

The pilot research was undertaken in order to establish whether there are any barriers to the use of language provisions that potentially affect access to health care.

The team, led by Professor Yaron Matras, tracked all requests for interpreter and translation services across both Manchester’s GP surgeries and the Central Manchester University Hospitals NHS Foundation Trust (CMFT). Additionally, interviews with medical practitioners, interpreters, and users of health care services from a variety of backgrounds including the city’s Pakistani, Somali, Arab and Roma communities were carried out.

Despite the volume of requests, the report found that patients’ reliance on language provisions is transitional, and that over time increased familiarity with the system, and individuals’ rising level of proficiency in English reduce their dependency on interpretation services.

The dynamics of constant population changes in a global city such as Manchester mean that the availability in principle of interpreter provisions in the health care system is a permanent necessity. Regular compilation and analysis of data can help us understand trends and plan provisions in a cost-effective manner

For eastern European languages in particular, the team found that a sharp rise in demand at the beginning of a three-year observation period was followed by a fall in the number of requests for interpreters, by typically around 40-50%, toward the end of the period.

The research team found no evidence to suggest that lack of adequate interpreter provisions is driving patients with lower levels of English to turn to emergency or other hospital services rather than to primary care.

There is also no evidence that particular language groups either engage, or fail to engage, disproportionately with individual services.

Yaron Matras, Professor of Linguistics at The University of Manchester’s School of Arts, Languages and Cultures commented: “The dynamics of constant population changes in a global city such as Manchester mean that the availability in principle of interpreter provisions in the health care system is a permanent necessity. Regular compilation and analysis of data can help us understand trends and plan provisions in a cost-effective manner”.

Speaking on behalf of Manchester's three Clinical Commissioning Groups, Dr Mike Eeckelaers, said: "As commissioners we want to make sure that we remove any barriers to healthcare so that the people who live in this city can have equal access to services. This is why we wanted a comprehensive study of where translation services are needed, which languages this covers, and the impact that having interpreter provision can have for patients."

Potential targets for COVID-19 vaccine found
Mother-in-law as figure of fun in classical literature debunked in new book
Psoriasis is unequally distributed across the globe
Dr Holly Morse re-evaluates the myths of Eve in new volume
Nanopatterning electronic properties of twisted 2D semiconductors using twist
Physicists measure short-lived radioactive molecules for the first time
Some modules are disabled because cookies are declined. Accept cookies to experience the full functionality of this page.
ACCEPT COOKIES
We use cookies to optimize the website, no personal information is stored. Learn more
DECLINE COOKIES ACCEPT COOKIES