Anti-globalisation has switched from a left to a right-wing issue – what now?
Newsroom

Anti-globalisation has switched from a left to a right-wing issue – what now? 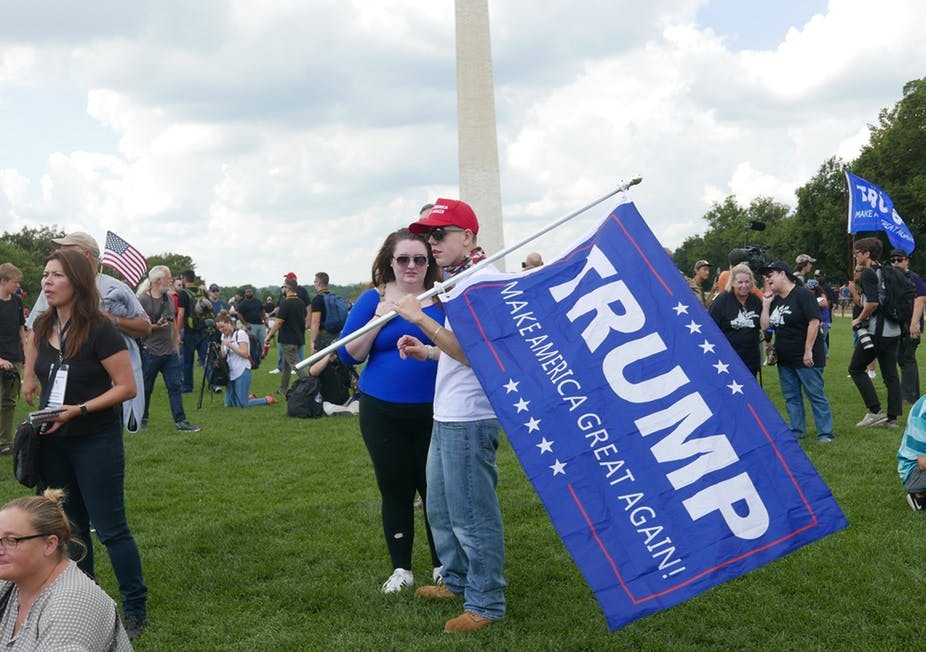 The world is currently witnessing a new backlash against economic globalisation. Supporters of the UK’s exit from the European Union seek to “take back control” from Brussels, while Donald Trump’s economic ethno-nationalism has promised to put “America first”.

Trump arrives at the 2018 World Economic Forum in Davos after his administration claimed that US support for China joining the World Trade Organisation (WTO) in 2001 was a mistake and having just announced large tariffs on imported solar panels. It is remarkable that the backlash that he represents emerged from the right of the political spectrum, in countries long recognised as the chief architects and beneficiaries of economic globalisation.

At the turn of the millennium, the primary opposition to globalisation was concerned with its impacts in the Global South. Joseph Stiglitz, former chief economist at the World Bank, wrote in his 2006 book Making Globalization Work that “the rules of the game have been largely set by the advanced industrial countries”, who unsurprisingly “shaped globalisation to further their own interests.” Their political influence was represented through dominant roles in organisations such as the World Bank, International Monetary Fund and WTO, and the corporate dominance of their multinationals.

In the 1990s the anti-globalisation movement opposed neoliberal economic integration from a range of perspectives, with a particular emphasis on the Global South. The movement was populated by activists, non-governmental organisations and groups with a variety of concerns: peace, climate change, conservation, indigenous rights, fair trade, debt relief, organised labour, sweatshops, and the AIDS pandemic. 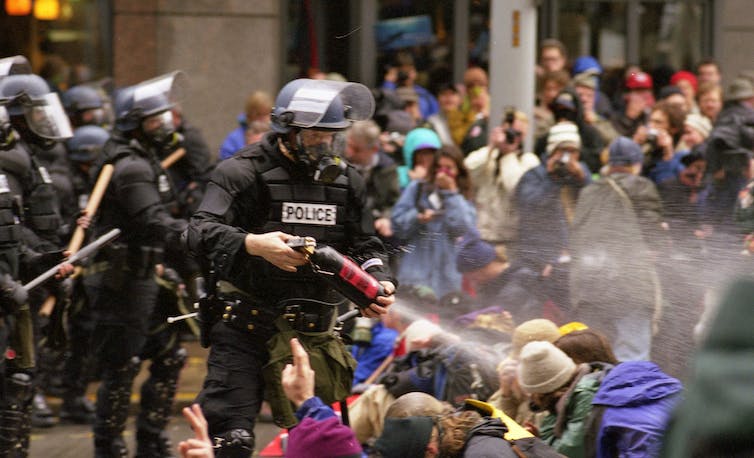 Protests in Seattle against the WTO in 1999. By Steve Kaiser from Seattle via Wikimedia Commons, CC BY-SA

Economic globalisation in the 21st century has evolved in ways that neither its extreme proponents nor its most vocal critics predicted. A big switch has occurred, and today’s backlash against globalisation emerged from concerns about its impacts in the Global North.

In the aftermath of the Brexit vote, UK prime minister Theresa May offered a sceptical assessment at the 2017 World Economic Forum at Davos, arguing that “talk of greater globalisation can make people fearful. For many, it means their jobs being outsourced and wages undercut. It means having to sit back as they watch their communities change around them.” The US, under Trump, subsequently began renegotiating NAFTA and withdrew from the Trans-Pacific Partnership.

The polling company YouGov, in a 2016 survey of people across 19 countries, found that France, the US and the UK were the places where the fewest people believe that “globalisation has been a force for good”. In contrast, the survey found the most enthusiasm for globalisation in East and Southeast Asia, where over 70% in all countries believed it has been a force for good. The highest approval, 91%, was in Vietnam.

Most notably, China took a very different stance on globalisation than the US and the UK at the 2017 Davos gathering. China’s president, Xi Jinping, said that his country will assume the leadership of 21st century globalisation. Defending the current economic order, Xi said that China was committed to make globalisation work for everyone, which was its responsibility as “leaders of our times”.

At Davos in 2018, Narendra Modi, prime minister of India, has already warned against de-globalisation:

It feels like the opposite of globalisation is happening. The negative impact of this kind of mindset and wrong priorities cannot be considered less dangerous than climate change or terrorism.

What drove the switch?

Significant proportions of the US and other countries in the Global North have experienced limited, if any, income gains in the most recent era of globalisation. Leading global inequality expert Branko Milanovic has explored changes in real incomes between 1988 and 2008 to show who particularly lost out on relative gains in income. He found two groups lost most: the global upper middle class – those between the 75th and 90th percentiles on the global income distribution, of whom 86% were from advanced economies – and the poorest 5% of the world population.

A different picture emerges in the Global South. People living in Asia accounted for the vast majority of those who experienced relative income gains from 1988 to 2008. In comparison with the 1990s, the Global South now earns a much larger share of world GDP, has more middle-income countries, more middle-class people, less dependency on foreign aid, considerably greater life expectancy, and lower child and maternal mortality.

Emerging evidence indicates that increased global trade has played a role in economic stagnation or decline for people in the north, especially in the US. MIT economist David Autor and his colleagues suggest that the “China shock” has had major redistributive effects in the US, leading to declines in manufacturing employment.

Economists had previously argued that the “losers” from trade could be compensated by transfers of wealth. Autor and his colleagues found that while there have been increases in welfare payments to regions of the US hardest hit by the trade shock, they fall far short of compensating for the income loss.

Not all of the stagnation and decline experienced in the Global North can be attributed to economic globalisation. Technological change is a big factor and national policy choices around taxation and social welfare have also played key roles in shaping inequality patterns within countries. In such a context, “globalisation” has been deployed as a scapegoat by some governments, invoking external blame for economic problems made at home.

The current backlash is not just about economic globalisation. It has involved ethno-nationalist and anti-immigrant components, for example among supporters of Trump and Brexit.

Read more: The G20 summit shows a world divided in its attitudes toward globalisation

Neither does less of a backlash in the Global South necessarily mean support for neoliberal globalisation – and the optimism in countries such as Vietnam may paradoxically be a result of an earlier rejection of it. China, in particular, has not followed the same approach to economic globalisation as that which was encouraged by the US and organisations such as the IMF and World Bank in the late 20th century.

Meanwhile, many of the world’s poorest in the Global South have seen very little improvement in quality of life in recent years, yet are much more marginal and less well positioned to express their frustrations than the “losers” in countries such as the US and UK. They must not be forgotten.

A key lesson from the late 20th century is to be wary of wholesale attacks on, and sweeping defences of, 21st century economic globalisation. In light of the difficulties of establishing solidarity between “losers” in different parts of the world, the challenge of our times is for an alter-globalisation movement which addresses all of them.