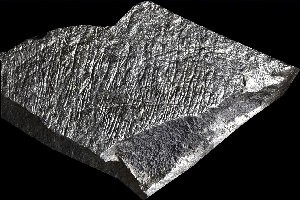 Archaeologists from the UK working in the Channel Island of Jersey have found the remains of a 14,000 year old hunter-gather settlement offering great views over landscapes now drowned by the English Channel.

The site, called Les Varines, is located in the Jersey parish of St Saviour and has produced over 5,000 scattered stone artefacts during the past five years of excavation. But the team has unearthed denser concentrations of tools and burnt bone and, for the first time, fragments of engraved stone. These are currently under study in an attempt to unravel the significance of these unique finds.

Dr Chantal Conneller, a Co-Director of the project from The University of Manchester, said “We knew from the beginning that Les Varines was an important site. There is nothing of its size or scale elsewhere in the British Isles but there are parallels in France and Germany. Previously we had recovered stone artefacts disturbed by later mud flows, but now it seems we have found the well preserved edges of the settlement itself. Incised stones can be common on Magdalenian camps, many are known from sites in the Germany and the south of France, where they are often seen to have a magical or religious use. However they are rare in Northern France and the British Isles, making this a significant find. Although we are not yet sure of the exact age of the campsite, it might well represent some of the first hunter-gather communities to recolonise the north of Europe after coldest period of the last Ice Age”.

The work was carried out by a team from The University of Manchester and University College London.

Dr Ed Blinkhorn, of UCL Institute of Archaeology, who led the excavations, said “This has been the culmination of five years of patient work, tracing thousands of flint tools within slope deposits back to the mother lode. We knew a significant hunter-gatherer camp lay in this field and it seems we’ve finally found it.”

"Although we are not yet sure of the exact age of the campsite, it might well represent some of the first hunter-gather communities to recolonise the north of Europe after coldest period of the last Ice Age”.

The settlement sits on top of an ancient cliff line and geological investigation has shown that the camp probably sits in a small saddle in the landscape between an old sea stack and rising ground to the north. This situation would have afforded a degree of protection from the weather during a period when the climate was still relatively cold. This site dates toward the end of the last ice age and was occupied by modern human hunter-gatherers of the Magdalenian culture, who reoccupied northern and western Europe between 16 and 13,000 years ago. Hunting animals like reindeer and horse, they left a rich record of sophisticated stone age technology and spectacular works of art including the cave paintings at Altamira and Lascaux.

For this reason the team are paying particular attention to three fragments of an exotic stone recovered from the site which show the traces of fine engraved lines across their surface.

Dr Silvia Bello, of the Natural History Museum, who is currently studying the fragments said “We are at an early stage in our investigations, but we can already say the stones are not natural to the site, they show clear incised lines consistent with being made by stone stools, and they do not have any obvious functional role. Engraved works of abstract or figurative art on flat stones are part of the Magdalenian cultural package and one exciting possibility is that this is what we have here.”

The fragments were found within one small corner of the 2015 excavation trenches, alongside stone artefacts and close to a concentration of burnt bone, sealed within an apparent ancient landsurface and associated with possible paving slabs.

The announcement coincides with the opening of Jersey Heritage’s Jersey: Ice Age Island exhibition, displaying the results of the team’s work alongside the wider record of Ice Age archaeology from Jersey, the British Isles and Northern France.

Jon Carter, Director of Jersey Heritage said, “Jersey has an exceptional record of early stone age archaeology for such a small island, and this exhibition show cases these sites and the science behind research currently being undertaken by the Ice Age Island team. This research, supported by the Sates of Jersey Tourism Development Fund and Capco Trust, is bringing to light new stories from Jersey’s deep Ice Age heritage and continuing to show that the Island, with exceptional sites such as Les Varines and La Cotte de St Brelade is a scientific treasure trove”

The finds are the latest results from the Ice Age Island project, a collaboration between Jersey Heritage and a UK archaeological team run, through the British Museum with the UCL Institute of Archaeology, the University of Manchester, University of Wales Trinity St Davids, St Andrews University and the University of Southampton (CAHO). The project is funded by the Jersey Tourist Development Fund and the Capco Trust, while on-going analysis is supported by the Pathways to Ancient Britain and Human Behaviour in 3D Projects funded by the Calleva Foundation. The Jersey: Ice Age Island Exhibition runs from the 25th October 2015 until 30th December 2016 at Jersey Museum.