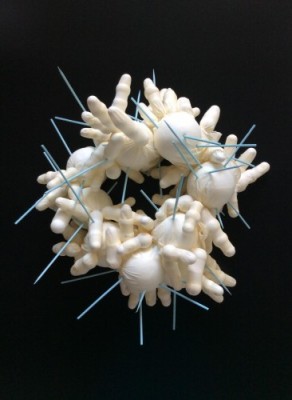 A new collection of artworks on display in Salford (21-24 January) has been inspired by x-rays taken from Salford’s coal-miners in the 1950s which helped establish a world-wide method of classifying the severity of osteoarthritis.

Nicola Dale worked as artist in residence at The University of Manchester’s Arthritis Research UK Centre for Epidemiology during 2015 and was inspired by the x-ray archive held in the Centre.

Between 1950-1952, the University’s Dr John Lawrence studied the relationship between occupation and arthritis. He collected x-rays from local miners (the majority from Salford) and his study found that miners had more degenerative spinal disease.

The x-rays underpinned the ‘Kellgren & Lawrence’ classification system for osteoarthritis, still in worldwide use today.

Taking Dr Lawrence’s x-rays as her starting point, Nicola has created a new body of work that encompasses sculpture, collage and photography. It is primarily concerned with the idea of illumination: from the lightbox needed to read x-rays and the flickering of the miner’s lamp, to the lightbulb moments that inspire scientists and artists alike.

Speaking to miners has been like getting the x-rays to talk to me – it’s really bought them to life. I have learned so much about what it was like to work in such a tough job. The miners’ memories have been really inspiring

Through interviews and workshops, she has also engaged with local miners and current arthritis patients to create a mysterious and beautiful exhibition.

She said: “Speaking to miners has been like getting the x-rays to talk to me – it’s really bought them to life. I have learned so much about what it was like to work in such a tough job. The miners’ memories have been really inspiring.”

Dr Will Dixon is Director of the Arthritis Research UK Centre for Epidemiology and an Honorary Consultant Rheumatologist at Salford Royal NHS Foundation Trust. He said: “Nicola’s inspirational artwork encapsulates the science of epidemiology: the study of the occurrence and determinants of disease in populations.

“Drawing on the strong heritage of arthritis research in Manchester and Salford, it captures the insight derived from populations, as well as highlighting the importance of individuals. It is a truly wonderful celebration of this important archive.”

This work is supported by The University of Manchester and Wellcome Trust [105610/Z/14/Z].

Audience       This event is FREE, suitable for all ages and open to anyone with an interest in science, medicine, local history, mining, arthritis or art

Please note: the exhibition floor has no disabled access