The latest news about Egyptology 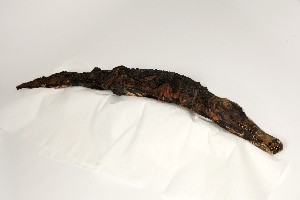 The programme, which airs at 9pm on BBC 2 (Monday 11 May),  looks at the Egyptian practice of mummifying animals and reveals that up to 70 million creatures were wrapped and buried in underground catacombs.

A university team of radiographers and Egyptologists are filmed using the latest medical imaging technology to scan hundreds of animal mummies removed from Egypt during the 19th and 20th centuries.

Through their work, they discovered that many of the animal mummies are, in fact, empty.

Dr Lidija Mcknight, who led the team, said: "We always knew that not all animal mummies contained what we expected them to contain, but we found around a third don't contain any animal material at all - so no skeletal remains."

Dr McKnight’s team used a CT Scanner and X-ray machine, that would normally be used on children, to see beneath the wrappings without damaging the ancient specimens inside. Horizon joined them over three nights last Autumn and filmed around a dozen of the scans.

We always knew that not all animal mummies contained what we expected them to contain, but we found around a third don't contain any animal material at all - so no skeletal remains

The work forms the basis of tonight’s documentary which explores the bizarre role animals played in ancient Egyptian belief.

The team scanned animal mummies including wading birds,  falcons,  cats, shrews and a five-foot long Nile crocodile.  In one instance, a crocodile- shaped mummy was found to contain eight baby crocs carefully wrapped together. In another case, scans revealed that for thousands of years, an intricately crafted cat-shaped mummy , with tiny ears and a nose, in fact contained only a few pieces of cat bone.

Horizon - 70 Million Animal Mummies: Egypt's Dark Secret, will air on BBC 2 on Monday 11 May at 9pm.