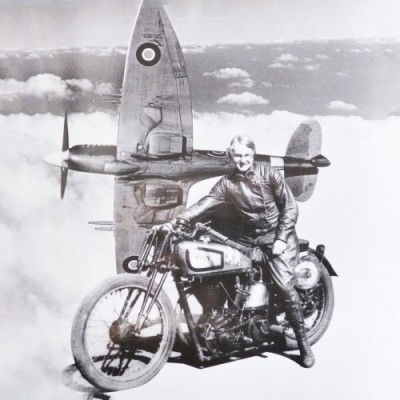 The role of a Manchester pioneer who helped the RAF when facing one of its greatest challenges is remembered to coincide with the celebrations marking the 75th anniversary of the end of The Battle of Britain.

Beatrice Shilling – nicknamed ‘Tilly’ – an electrical engineering graduate from The University of Manchester made a small adjustment to RAF fighter planes during World War Two which transformed their performance and helped them to match the powerful Luftwaffe. She was later awarded an OBE for her work.

During the early part of the war, RAF pilots reported a serious problem with the Rolls-Royce Merlin engines powering their Spitfires and Hurricane. When pitching their planes into a hard nose dive the resulting negative g-force would flood their engine's carburettor, causing the engine to stall.

Frustratingly, this negative g-force often occurred when manoeuvring against an enemy aircraft in a dogfight – remedial action by the RAF pilot inevitably allowed the enemy plane to escape. German fighters used fuel injection technology and could therefore out-turn their pursuing RAF counterparts.

A solution was urgently required at this critical stage of the war – and Beatrice Shilling then working for the Royal Aircraft Establishment (RAE), an aeronautical research centre, came up with a timely and elegant solution.

She invented the RAE restrictor, effectively a small metal disc with a hole in the middle that fitted into the Merlin engine's carburettor helping to limit fuel flow and prevent flooding at critical moments.

After successfully testing the device it was quickly praised by Allied fighter pilots and soon entered service – and RAF folklore. Beatrice and her team visited frontline RAF fighter bases to fit the breakthrough restrictor before continuing work on developing a more substantive solution in the shape of the RAE Hobson injection carburettor.

More than seventy years later, the University is celebrating Beatrice Shilling’s work by including her on a special timeline to be fitted into the newly refurbished student hub based in the Barnes Wallis Building, at The University of Manchester’s North Campus.The timeline artwork features Beatrice’s achievements and she is placed alongside other Manchester pioneers, including famous physicist Ernest Rutherford, as well as women who have also made an impact in science and engineering, such as Danielle George, a radio frequency expert, and e-science pioneer Carole Goble.

“Beatrice Shilling is such an inspiration to our students and we are delighted to be celebrating this woman who made such a significant impact to engineering and responded so brilliantly to the technical challenges of her time,” said Rachel Brealey, the Faculty’s Director of Operations.

1924: Beatrice decided in her mid-teens she wanted to be an engineer

1929: She enrolled on the Electrical Engineering degree as one of two women students

1933: Beatrice completed an MSc in Mechanical Engineering at Manchester

1940: She invented the RAE restrictor to counter engine cut-out in early Spitfire and Hurricane fighter aeroplanes during the Battle of Britain

1947: Awarded the OBE for her work during World War II