Bioenergy gets graphic with new illustrated guide to the subject 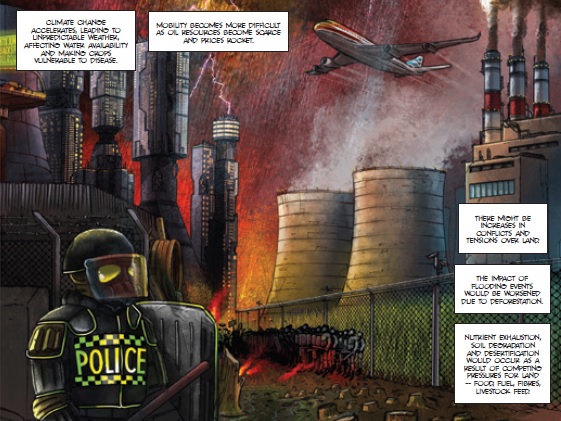 A new graphic novel which addresses the big questions around bioenergy and climate change is being launched by The University of Manchester ahead of a major conference this week.

In a unique collaboration between artists and researchers working at the cutting-edge of bioenergy, the graphic novel aims to answer some of the big questions such as what is bioenergy, does growing biofuel compete with growing food, and does bioenergy really reduce greenhouse gas emissions?

It is aimed at a general audience: a handy and accessible guide for the bioenergy industry and policymakers to use in promoting the benefits and addressing some of the controversies around the subject, but also accessible for school-children.

Professor Patricia Thornley, director of the Supergen Bioenergy Hub and professor of sustainable energy systems at The University of Manchester said: “Bioenergy has the potential to be an important part of the fight against climate change. It can come from a large number of sources – farming by-products, crops, sewage or even algae grown in the sea – and offers many benefits that other renewable sources of energy do not.

“However it can also be controversial, with people concerned about the impact on farmland for example. This graphic novel helps to explain how the work in the hub is tackling these issues. Publishing it in this engaging format helps us present a lot of information in a way that is much more accessible to people without the time or inclination to read dense reports.”

Bioenergy has the potential to be an important part of the fight against climate change. It can come from a large number of sources – farming by-products, crops, sewage or even algae grown in the sea – and offers many benefits that other renewable sources of energy do not

Bioenergy: A Graphic Introduction was put together by northern artists, who have interpreted discussions with scientists from the Supergen Bioenergy Hub in a series of striking images which imagine alternative futures and explain some of the technology involved and how it might be put into practice.

The Supergen Programme was set up in 2001 to deliver sustained and coordinated research on sustainable power generation and supply across several key research areas, including tidal, storage technology (including batteries for grid and transport), smart networks and wind power. The programme is managed by the Engineering and Physical Sciences Research Council (EPSRC) as part of the RCUK Energy Programme, which currently supports seven hubs at universities across the country.

The graphic novel will be launched on Tuesday 21 of March at The University of Manchester, ahead of a two-day conference where the latest technologies and policy ideas will be presented to an international audience.

Keynote speakers at International Bioenergy Conference 2017 include Catherine Bremner, Head of Science - Energy and Climate Change at the UK Government Department for BEIS; Neil Harrison, Director of the re:heat wood energy company, and leading researchers from the UK, France, Canada and beyond.

There will be sessions on a variety of aspects of bioenergy including aviation fuel, policy and carbon emissions.

Dr Laura O’Keefe, the Supergen project manager added: “Bioenergy is not the only energy source we’ll be using in the future, nor is it one without impact. However, technology being developed right now in centres around the world is making this form of power generation much better able to replace the polluting fossil fuels that we need to stop using as soon as possible.”

The graphic novel is funded by the Research Councils UK (RCUK) Energy Programme.

Download a copy of the graphic novel here (pdf)