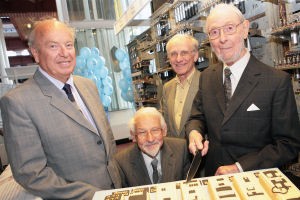 The birth of the first modern computer is being celebrated on Friday 20 June 2008 at The University of Manchester and MOSI (Museum of Science & Industry).

Digital 60 Day marks the 60th anniversary of the birth of the world’s first stored program digital computer, which was designed and built at The University of Manchester by the late Tom Kilburn and Freddie Williams.

On June 21, 1948, shortly after 11am, the Small Scale Experimental Machine (SSEM) - nicknamed The Baby - executed its first program.

The Baby changed the world and was the forerunner of all modern computers, iPods, mobile phones and other gadgets we take for granted today.

A number of special events will take place on Digital 60 Day, including a large event for schools.

Hundreds of school pupils from across Greater Manchester and the UK will arrive on campus to see the winners of the UK Schools Computer Animation Competition announced.

They will also see a live video link-up with MOSI in Manchester, complete with live demonstration of the working Baby replica housed there, plus a computer science magic show. The Museum will also hold a number of family activities and demonstrations of Baby on 21 June.

“The University has continually built on this legacy of innovation and The School of Computer Science enjoys an international reputation for being at the very cutting edge of research in computer science and new technology.

“With excellent industry links and numerous outstanding technological spin-out companies, the influence of the computer science research being done at The University extends regionally, nationally and internationally.”

Professor John Perkins, Vice-President and Dean of the Faculty of Engineering and Physical Sciences at The University of Manchester, said: “The University is extremely proud of what Tom Kilburn and Freddie Williams achieved in 1948.

“The birth of the Baby changed the world forever and we hope the Digital 60 Day celebrations will raise the profile of computer science and encourage the brightest and best of the next generation to engage in the challenges facing computing over the coming decades.”

This evening, at a special awards ceremony and drinks reception, the surviving pioneers from the Baby design and development team Geoff Tootill, Dai Edwards and Alec Robinson and Tommy Thomas will each be awarded The University of Manchester's Medal of Honour and also a Medal of Honour from The British Computer Society.

The ceremony will be followed by the inaugural Kilburn Lecture, delivered by Professor Steve Furber CBE from The School of Computer Science on ‘The Relentless March of the Microchip’.

For further information on the events planned please see http://www.digital60.org or www.mosi.org.uk

A wide selection of images and videos are available to support this story.