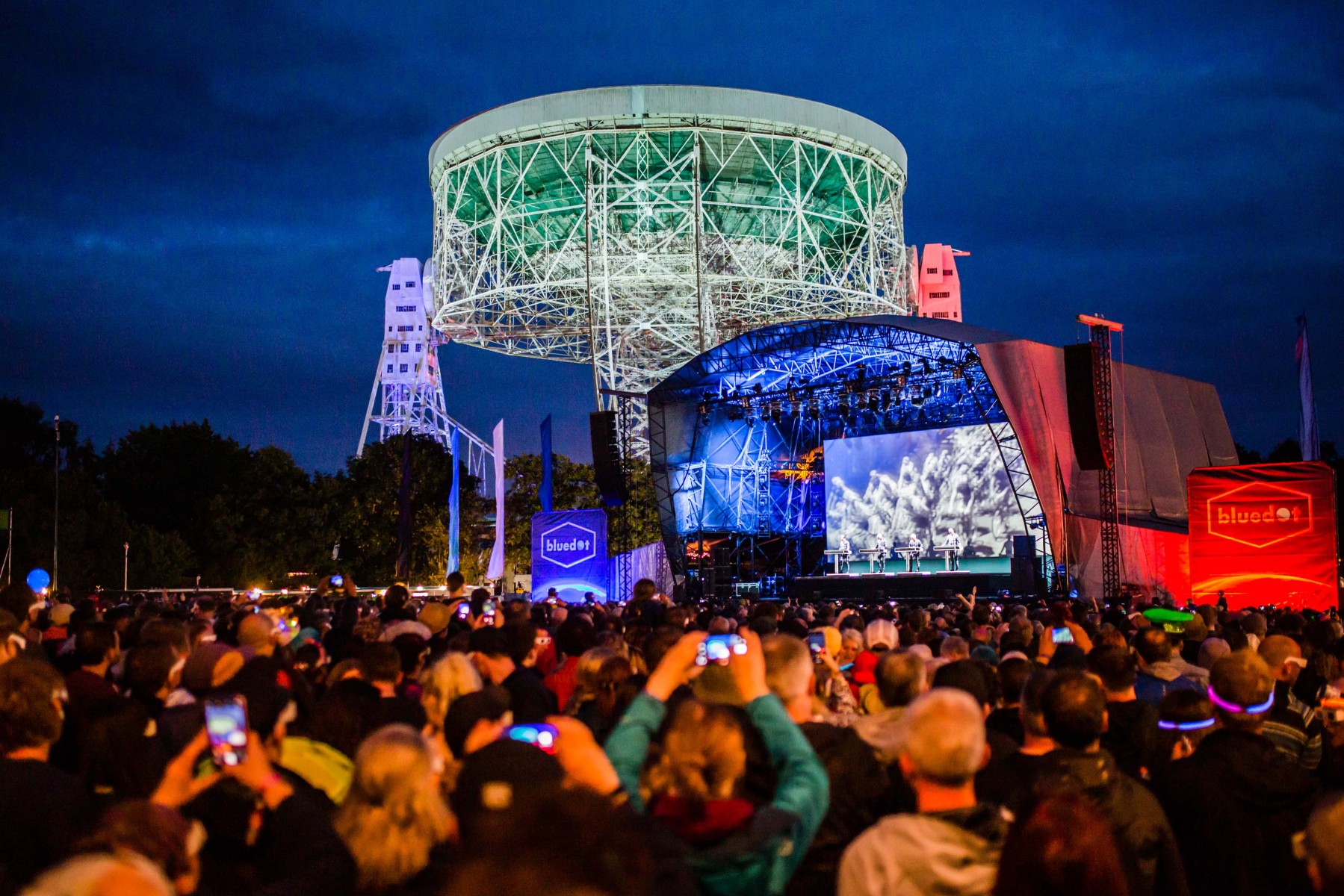 After a two year hiatus, the much-loved bluedot festival is set to return to Jodrell Bank on 21-24 July 2022 and the team have today announced an unmissable Björk performance as the Sunday night headline act.

Teresa Anderson, Director of The Jodrell Bank Centre for Engagement, added: “We’re delighted to welcome bluedot back to its home at Jodrell Bank. Bjork is an artist who works on the creative common ground between art and science so it’s amazing that she will be headlining the festival, here at the UK’s home of Astrophysics. We’re really looking forward to seeing everyone again!”

Bjork will be joined by The Hallé Orchestra accompanied by a projection mapping spectacle. The audio-visual performance will feature video and animated projections on the iconic Lovell Telescope, for a unique show exclusive to bluedot. This will be the first-time audiences at bluedot have seen the dish of the 76-metre wide Lovell Telescope surface transformed into a gigantic digital artwork.

Festival Director Ben Robinson said: “After the postponements of the last two summers we wanted to return with something extra special and unique. We spoke to Björk’s team about curating visuals to accompany the show & being the first confirmed artists to project onto the surface of the Lovell Telescope at bluedot festival. Björk and her team are already working on this unique spectacle & we are incredibly grateful for their enthusiasm for making the closing set of bluedot’s return truly unique.” 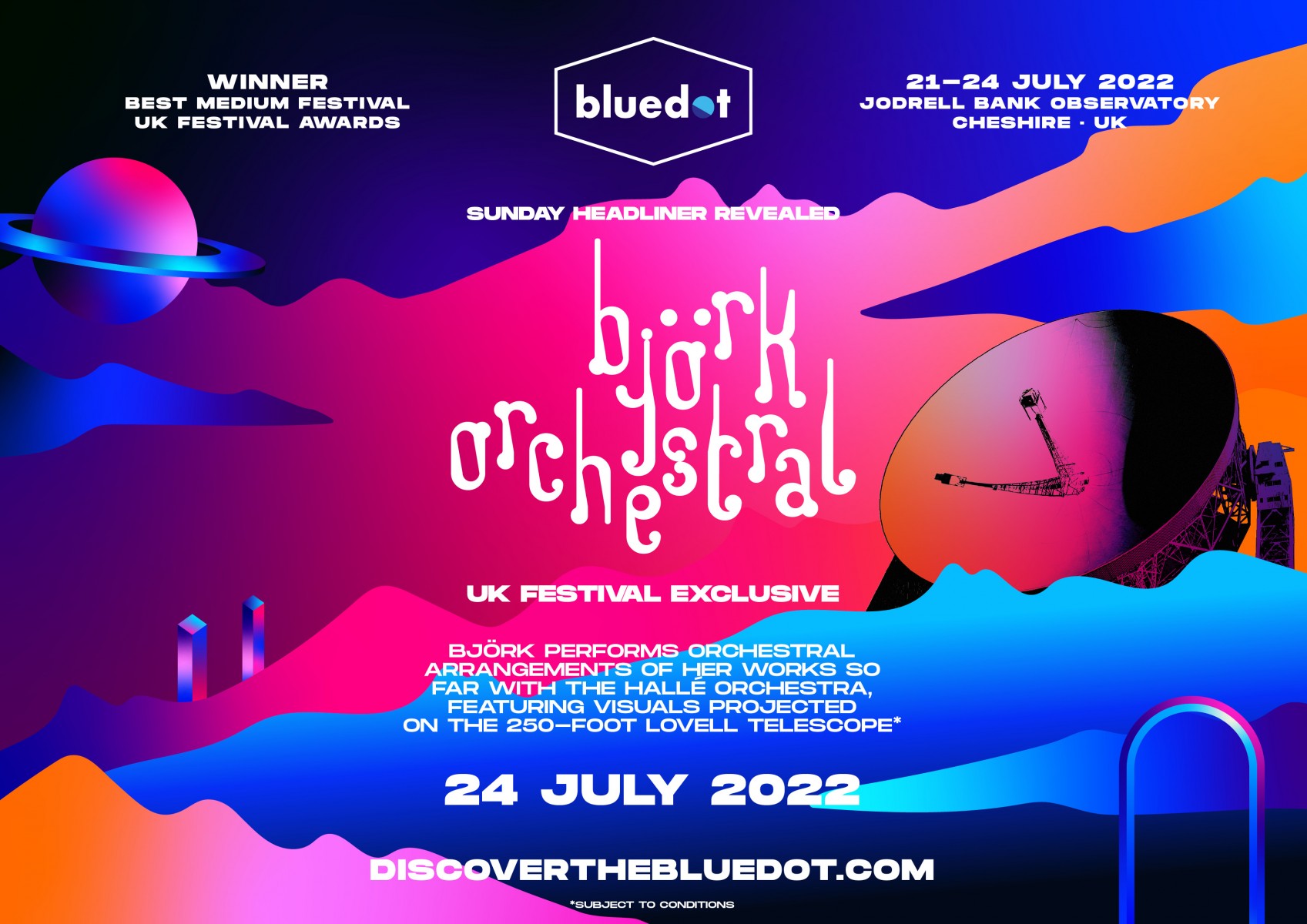 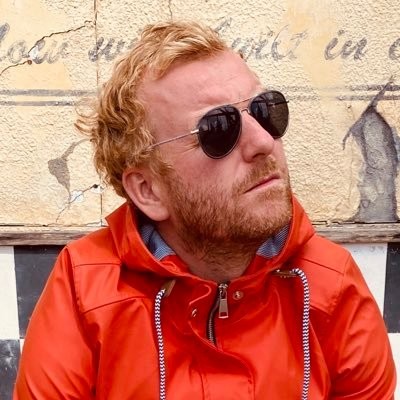 Björk and her team are already working on this unique spectacle & we are incredibly grateful for their enthusiasm for making the closing set of bluedot’s return truly unique.

In a prodigious career extending over four decades Björk has taken popular music far beyond normal convention, winning numerous awards and inspiring generations of artists to push the limits of their creativity. With all arrangements by Björk, the new orchestral audio-visual work promises to be a ground-breaking expression of a life at the cutting edge of experimental music, not to mention an incredible spectacle and a genuine bluedot highlight.

Bluedot 2022 will be the fifth chapter of the multi-award winning music, science and culture event at UNESCO World Heritage Site, Jodrell Bank. Previous headline performances include the likes of Kraftwerk, New Order, The Chemical Brothers, The Flaming Lips, and Jean-Michel Jarre, alongside high-profile talks from some of the UK’s leading scientists and thinkers such as Helen Sharman, James Burke, Alice Roberts, Brian Cox, Jim Al-Khalili and Liz Bonnin.

With hundreds of artists and speakers still to be announced across the pantheon of arts, culture, music and science, bluedot 2022 will once again demonstrate why it truly is a festival unlike any other. The full science, arts and culture and family programmes will be announced in the coming months.

For tickets and information visit: discoverthebluedot.com