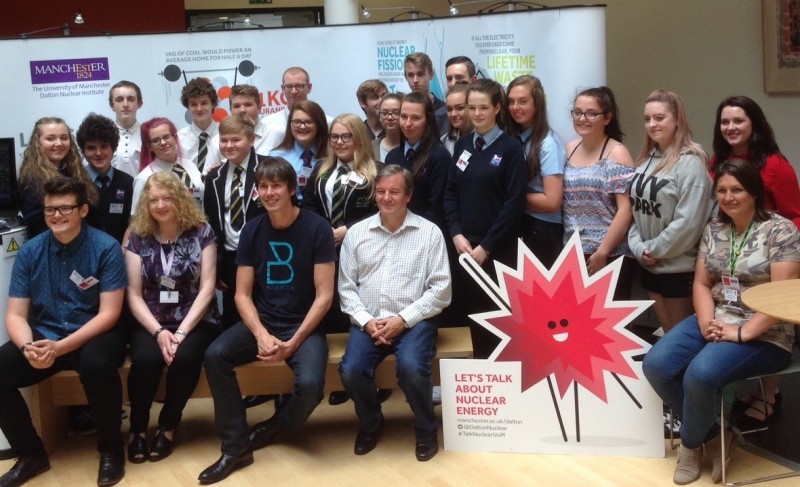 A team from The University of Manchester has teamed up with the REACT Foundation, which encourages students from west Cumbria to pursue an engineering-related degree programme, to give a group of young people from four Cumbrian schools the chance to visit London to participate in a unique science summer school.

Now in its fifth year, the two-day event at St Paul’s Way - an outstanding ‘Through’ school and ‘National Teaching School’ in east London, which created the Science Summer School - was hosted by Manchester’s own Professor Brian Cox. With the help of the REACT Foundation, Adrian Parker and Anne Knott from the University’s Dalton Nuclear Institute took 22 students to the capital to take part in the event, which is designed to inspire and encourage the next generation of scientists and engineers.

The students were able to listen to captivating TED-style talks from leading scientists, take part in hands-on experiments, and watch presentations from other students about their science projects as well as delivering their own. They also learned more about The University of Manchester and the work of Dalton Nuclear Institute at an interactive stand.

“This has been a truly inspirational couple of days for these students, and a wonderful opportunity for the west Cumbrian schools from which they’ve come to link up with this unique event held in the nation’s capital. Already this has begun to ignite a vision within these local communities to reproduce a similar initiative so that in future far greater numbers can participate in this powerful concept for raising the aspirations of young people.”

The inspiration behind this London-based event, social entrepreneur Lord Andrew Mawson and his team, have now set their sights on replicating the St Paul’s Way model in other parts of the country. It is hoped that by working with local schools and partners, the University will play a key role in launching a similar science summer school in west Cumbria in 2017.

Lord Mawson said: “To ensure that we continue to lead the world in scientific discoveries, we have to inspire young people to enter professions where they discover, innovate and create. We need to attract children who don't think they can ever become scientists or engineers, as well as those from more diverse backgrounds. I'm from the north of England, and I know we have so many talented children who would help make Britain the best place in the world to do science."