Can a smartphone application help treat anxiety and depression? 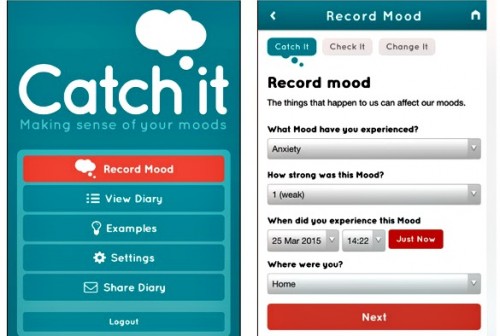 In a joint project between the Universities of Liverpool and Manchester, researchers have examined the initial trial of a smartphone application designed to help people manage their problems.

The ‘Catch It’ app uses some of the key principles of psychological approaches to mental health and well-being, and specifically Cognitive Behavioural Therapy (CBT), helping users better understand their moods through use of an ongoing diary.

CBT is a therapy that can help you manage your problems by changing the way you think and behave. It is most commonly used to treat anxiety and depression, but can be useful for other mental and physical health problems.

The widespread use of mobile phones makes effective therapies such as CBT potentially accessible to large numbers of people.

The Catch It app takes users through a process referred to as “Catch it, Check it, Change it.” Catch it aims to help the user identify thoughts and thinking styles associated with a shift in mood or a particular emotion.

Professor Peter Kinderman from the University of Liverpool said: “This type of therapy cannot remove problems, but it can help people deal with them in a more positive way. It is based on the concept that your thoughts, feelings, physical sensations and actions are interconnected, and that negative thoughts and feelings can trap you in a vicious cycle.

“Our research examined the uptake and usage rates of this application along with the faithfulness of user responses to CBT principles and their impact on reported negative and positive moods.”

With more research, we hope this app might benefit people with a range of mental health problems

A relatively modest proportion of people chose to download the app, once used, the app tended to be used more than once. Also, 84% of the user-generated content was consistent with the basic concepts of CBT.

“Smartphone apps have potential beneficial effects in mental health through the application of basic CBT principles. More research with randomised controlled trial designs should be conducted.”

University of Manchester researcher Dr Sara Tai said: "It is exciting that this app has the potential to make psychological approaches more accessible to anyone. Our research demonstrates that using the app can help people to broaden their perspectives of their problems, making a positive difference to how they are feeling. With more research, we hope this app might benefit people with a range of mental health problems."

The full study, entitled ‘The feasibility and effectiveness of a novel CBT smartphone app: ‘Catch It’’, was published in the British Journal of Psychiatry Open.

Can a smartphone application help treat anxiety and depression?