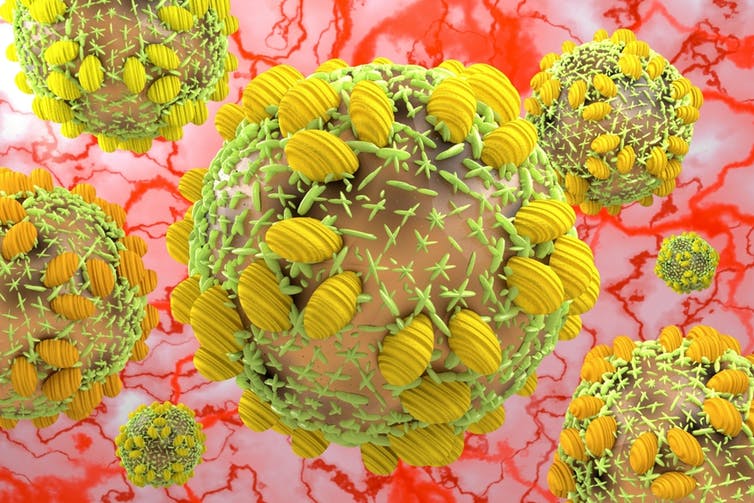 The World Health Organisation set a goal to eliminate hepatitis C by 2030. The NHS recently announced that it will go one better than that: it will eliminate the disease in England by 2025. In theory, the goal is achievable, but there are still significant challenges to overcome.

Hepatitis C is a viral infection that causes chronic liver disease, which can lead to life-threatening complications. Thankfully, a new class of drugs, known as direct-acting antivirals (DAAs) has revolutionised hepatitis C treatment. A three month course of DAAs can clear hepatitis C from the blood.

The drugs aren’t perfect, though. They have a failure rate of around 10-15%. However, the real problem with eliminating the disease lies in the hidden nature of the hepatitis C epidemic in the UK.

For many years it was known that some blood donations, or products made from blood, such as factor VIII used to treat haemophilia, contained an unknown virus that inflammed the liver (hepatitis) in patients who received a transfusion. The identity of this virus remained unknown until the mid-1980s when the development of new technologies allowed the virus to be identified by its gene sequence.

Tests on blood donations soon followed, designed to help prevent the transmission of the virus by transfusion or during surgery. As these tests were applied more widely, though, the real extent of the problem with hepatitis C virus began to emerge.

By the early 1990s, it became clear that many more people were infected than previously thought. Two groups were particularly affected: those who had been infected through medical treatment (including some children who had been infected by their mother either in the womb or during the process of birth), and a second much larger group who had used illegal drugs (injecting or inhaling drugs through the nose). Many of the infected people had not used drugs for years.

Hepatitis C doesn’t usually cause symptoms in the early stages of infection, but the virus remains in the liver, causing a hidden and silent infection in at least 80% of cases. (In 20% of cases, the patient’s immune system manages to clear the virus on its own.) Over decades, the infection causes progressive liver damage. By the time the patient begins to suffer from fatigue as a result of the infection, liver failure and liver cirrhosis has usually set in. This can progress to liver cancer (hepatoma) and premature death. Globally, hepatitis C virus infection is now a leading cause of liver transplantation.

As with many viral infections, at first there were few treatment options. The antiviral drug interferon was tried with limited success. Treatment was improved when interferon was combined with a second antiviral drug, ribavirin. However, some strains of the virus proved very difficult to treat, requiring 12 months of continuous therapy, and even then the infection sometimes returned once treatment stopped.

Elimination should not of course be confused with eradication. So far, only one human virus infection, smallpox, has been eradicated. Others, such as polio virus, are close to global eradication.

The World Health Organisation set a goal to eliminate hepatitis C by 2030. The NHS recently announced that it will go one better than that: it will eliminate the disease in England by 2025. In theory, the goal is achievable, but there are still significant challenges to overcome.

The current problem with hepatitis C infection is not how we should treat it, it is rather how do we identify those who are infected so that they can be guided into treatment and cure. For those who contracted infection through medical interventions and do not know they are infected, they may not yet be suffering the symptoms of long-term infection that would cause them to seek medical help. The biggest problem, however, lies with drug users – a social group that tends to actively avoid the health system for fear of being challenged or stigmatised because of current or former drug use.

In order to reach these two groups of infected people, new approaches to diagnosis outside of conventional healthcare facilities need to be much more widely applied. Simple rapid tests on blood or saliva specimens that can be used anywhere, or even self-collection of blood dried onto filter paper spots (known as “DBS testing”), offer ways to greatly extend the numbers of people who come forward for diagnosis. The wider application of these tests will be an essential step in persuading people who may be in denial about their risk of infection into a programme that offers a cure.

Hepatitis C virus could be eliminated. The treatment to do this is available, it appears to be cost effective and the technology to provide quick and easy diagnosis is available. However, a concerted and coordinated effort to reach the infected, but untested public, will be necessary if the NHS is to achieve its worthwhile goal of eliminating hepatitis C in England by 2025.