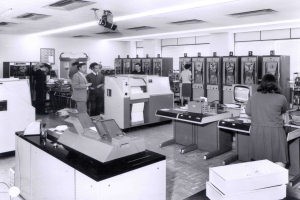 Scientists who worked on one of the world’s first supercomputers will gather this week to mark its 50th anniversary.

Developed at The University of Manchester between 1956 and 1963, the Atlas computer was at the time the most powerful in the world.

The first production Atlas was inaugurated at the University on 7 December 1962 by Sir John Cockcroft, the Nobel Prize-winning physicist who was Director of the UK’s Atomic Energy Authority.

Scientists and engineers who worked on the Atlas will attend the celebrations on Tuesday 4th and Wednesday 5th, which will include demonstrations of the 1948 Manchester Baby – the world’s first stored-program computer currently housed at the Museum of Science and Industry – an exhibition of Atlas artefacts, talks by pioneers and presentations on current Computer Science research.

Among the attendees will be a number of people who used the Atlas computer during their studies at The University of Manchester in the 1960s.

The aim of the Atlas was to build a computer that could operate at processing speeds approaching one microsecond per instruction, about one million instructions per second.

It was claimed that when the first Atlas arrived, it roughly doubled the UK’s computing scientific capability. A total of six Atlas 1 and Atlas 2 computers were delivered between 1962 and 1966.

Professor Simon Lavington, who started using Atlas as a research student in 1962, said: “The Atlas event will bring together, probably for the last time, a unique group of industrialists, academics and end-users who contributed to a world-class project which brought a huge increase of computing power to the UK’s scientific community in the 1960s”.

Professor Steve Furber, ICL Professor of Computer Engineering at The University of Manchester, said: “Atlas was in many ways the most remarkable of all of the machines designed at Manchester.

“Fifty years later, the concept of single-level store – what we now call virtual memory – is vital to the operation of everything from smart phones to supercomputers, and we owe that idea to the Atlas designers.

“Manchester built the world's first stored program computer, the Baby, in 1948, but it's important to remember that that wasn't our only contribution. Atlas was spectacularly fast for its day and highly innovative, and we are still building exciting new machines here to this day.”

The following events are open to anyone with an interest in the history of technology:

10.30am–1.50am: Three presentations on current Computer Science research
Numbers are limited. If you wish to attend any of these sessions, please register at:Atlas 50 Presentations

1.30–7pm: The main Atlas Anniversary event, consisting of an Exhibition, a Symposium of invited talks and discussion, demonstrations of an Atlas simulator and a drinks reception.

There will be no charge for attending the main event, but you are asked to register before 1 December at: 50th Anniversary of the Atlas Computer: Symposium registration form

Professor Furber, Professor Lavington and a number of other attendees are available for interview on request.

Images of the Atlas computer are available from the Press Office.

Speaking of the Atlas Operating System (which was called the Supervisor), Hugh Devonald who headed Ferranti’s Software Division, said in 1962: “The ‘Supervisor’ is the most ambitious attempt ever made to control automatically the flow of work through a computer.

“Its ability to handle the varied workloads that a machine of this size tackles will influence the future design of all computers.

“Atlas is in fact claimed to be the world’s most powerful computing system.  By such a claim it is meant that, if Atlas and any of its rivals were presented simultaneously with similar large sets of representative computing jobs, Atlas should complete its set ahead of all other computers.”

The Science Research Council installed an Atlas at its Chilton Computer Laboratory in 1964, for use by the UK’s scientific community. By 1966 the Laboratory’s Director, Jack Howlett, was able to write in his annual Report:  “In a typical week we run 2,500 jobs, input 800,000 cards and 30 miles of paper tape, print 1.8 million lines of output, punch 50,000 cards, handle 1,200 reels of magnetic tape.

“We have 250 projects on our books from university users and are usually doing work on 100 of these…. Our experience over the past year has shown that the Atlas central processor, with the Supervisor which is an integral part of the system, is an exceedingly powerful and flexible device which deals smoothly and efficiently with a heavy load of very varied work”.

In 1975 Bernard Swann, the Ferranti Sales Director, wrote:  “One of the remarkable features of the Atlas project was the small number of staff compared with the large numbers employed by IBM.”

Robin Kerr, who was part of the Atlas software team and who has worked for many years in America, said: “The Atlas project produced the patents for Virtual Memory. I would claim that Virtual Memory is the most significant computer design development in the last 50 years. Certainly it is the most widely used”.

Recently, George Coulouris who wrote software for Atlas in the 1960s, said: “The Compiler Compiler was remarkable in many ways. I still find it a quite amazing achievement in terms of the innovations that it contained and the effectiveness of its design and implementation.

“It encompassed innovative contributions at so many levels, from the very concept of a compiler-compiler to the inclusion of a domain-specific language for applications in system programming and the combination of interpretation with code generation.

“Its implementation was completed at a time when we had virtually no debugging tools, with only paper tape for inputting programs, no file storage and certainly no capability for interactive debugging or user interaction. What a tour de force!”