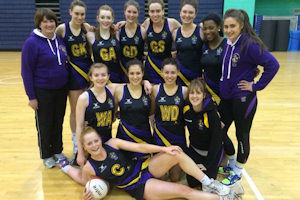 The University netball team has won the BUCS Premiership North and will now go on to play the Southern Premiership teams in a fight to become overall BUCS Champions.

Helen Gavin, a final year Politics student and club captain, said: 'I am overwhelmed by what the first team has achieved this year. Of course we were blessed with incredible talent at the start of season but talent means nothing unless you play well as a team and this is exactly what we've done. They have worked incredibly hard to win the Northern Premiership which was epitomised in their final match against Loughborough by coming back from five goals down at half time to win by ten at the end.

'The club are immensely proud and their success is reflected by all teams wanting the go out and win every week. Their dedication and focus inspiring and hopefully this will not be the first league that UMWNC win this year!'

A key factor in supporting this success was the introduction of the England Netball Intensive Netball Training Centre (INTC) in Manchester, one of three across the country. Paired with the strong partnership link with Northern Thunder, including support from Tracey Neville, and the commitment from the University students including newly recruited Manchester Sport Scholars Beth and Claudia Payne, Helen Housby, Honor De Winton and 2nd year student Beth Cobden the club can only build on this success, with all six teams continually striving to be the best they can be.

If you’d like to see the girls in action they will be taking on the Thunder Netball Performance League (NPL) Squad at 4pm on Saturday 15th February 2014 at Manchester Thunderdome (Wright Robinson Sports College, Gorton).

Purchase a ticket for this and you will also be able to watch the Netball Superleague (NSL) team take on Yorkshire Jets at 6pm! For more information and to purchase tickets go to the Manchester Thunder website: http://www.thundernetball.com/