Chilcot Inquiry: What is it? Why is it being published? And why has it taken so long? 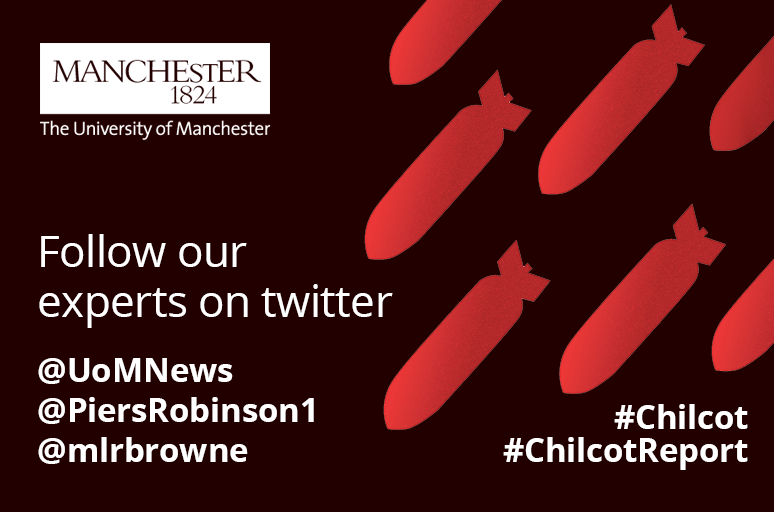 The Chilcot Inquiry’s report will be published on Wednesday 6th July. The inquiry, which is also known as the Iraq War Inquiry, was commissioned by former Labour Prime Minister, Gordon Brown, in 2009 to examine the UK's involvement in Iraq.

Here, some of The University of Manchester’s leading international political and legal experts give their opinion on what the report could say, what it means for Tony Blair and its potential implications and outcomes.

Dr Piers Robinson is Senior Lecturer in International Politics at The University of Manchester and an expert in the role media and propaganda can play in the run up to and during conflict. He is author of 'Pockets of Resistance: the British news media, war and theory in the 2003 invasion of Iraq' and has recently published research articles on the 2003 Iraq War.

He argues that, more than anything else, the inquiry needs to address the ‘deception’ that led to the UK’s involvement in the Bush-led coalition:

“A US-led Iraqi invasion was always likely to go badly wrong; the most important issue that needs to be addressed in the Chilcot Report is the question of deception during the run-up to the conflict. Will the inquiry tackle these concerns? This is the key question.

“There is no doubt that there was a deception around how the Iraq war started. This is the big issue and what this report really needs to address. The post-war planning and how it all went wrong are less important.”

Dr Shavana Musa is Lecturer in Constitutional and International Law at The University of Manchester and a BBC Expert Voice. She says that the report could provide the basis for families of victims to take legal action and seek compensation:

“Despite there being some political will, the Inquiry will probably not call for senior figures such as Tony Blair to be prosecuted. Whilst we can certainly expect criticism of the decision making process, it is expected that the report will not take up the legality of individual actions.

“However, evidence from the report could form the basis for future prosecutions, especially for families of victims. This could also allow mass claims for compensation.”

Martin Browne is a trained barrister and Associate Researcher at the Manchester International Law Centre. He has also advised governments and NGOs on the jurisdiction of the International Criminal Court (ICC)

He also says it is unlikely Tony Blair will be prosecuted as, despite anything else, there is actually no legal basis for such action: “Tony Blair, along with his senior political and military colleagues, is highly unlikely to face criminal charges despite leading the UK into a legally dubious war of aggression.

“Those calling for ‘Blair to be sent to The Hague’, such as Alex Salmond and Jeremy Corbyn, misunderstand a fundamental legal hurdle – the ICC does not have jurisdiction to prosecute the crime of aggression as states have not yet decided on the full definition. In the Britain, the crime of aggression has no legal basis in any part of UK law”.

However, commenting on the legal issues of the war, Dr Robinson adds: “The legality of the war was an important aspect for the British, though not so much for the Americans. So, did Blair really hope the war would be averted peacefully and without regime change, or had he signed up to war regardless? Chilcot’s views on this will be critical.

“If this is true, it raises serious questions about the adequacy of the UK political system and the health of its democracy”.