Illustrations of the Grand Ceremony was commissioned by the Confucius Institute at The University of Manchester for their 15th anniversary celebrations, and was composed by Dr Joshua Brown in April 2022. 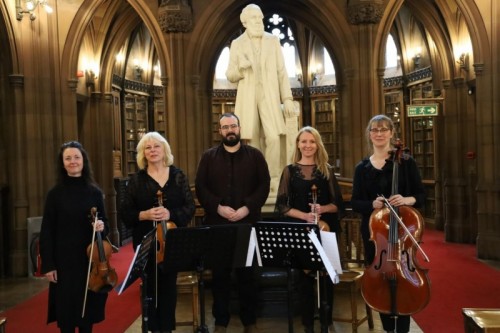 The composer was inspired by a Qing Dynasty scroll held in the collections of the John Rylands Research Institute and Library which took centre stage at last year’s exhibition The Qing: China’s Multilingual Empire. Following three years of in-depth research into the China collection, the exhibition was eventually opened to the public from October 2021 until March 2022, attracting thousands of visitors from across the UK, especially Chinese and Chinese Studies students.

The 24-metre scroll Wanshou shengdian tu illustrates bustling Beijing street celebrations for Emperor Kangxi’s birthday that took place in 1713 with meticulous detail of everyday life, shops, animals, infrastructure and entertainment. The music responds to the ceremonial and processional imagery shown, with some elements being the first depiction in Chinese art. Throughout the piece of music, the luachui or ‘scattering hammer’ rhythm is used to signify cultural exchange by combining rhythmic elements of Chinese opera with old English songs that existed around the same time. Another inspiration for this piece is the scroll as an object in itself, with the music being used as an analogy for the paper’s slow continuity and the deliberate but delicate ink marks on the surface.

Illustrations of the Grand Ceremony premiered online on 6th June 2022 at the John Rylands Library where the performance by Mercury Strings was filmed. Its live premiere took place on 20th June at St Anne’s church, Rossendale by the same ensemble. The accompanying tape track was produced and performed by Joshua Brown himself.

You can watch Illustrations of the Grand Ceremony on the Manchester Confucius Institute’s website (Chinese Music) and YouTube channel.

In addition to The Qing: China’s Multilingual Empire exhibition, Manchester Confucius Institute held a 16-day online campaign to mark their 15th anniversary. Through video and photo content on their social media platforms, they revisited key moments and accomplishments together in conversations with key stakeholders such as the former Chair of CI Board, Confucius Classrooms staff, cultural partners, teachers and staff.

Watch now and relive the last 15 years with them!