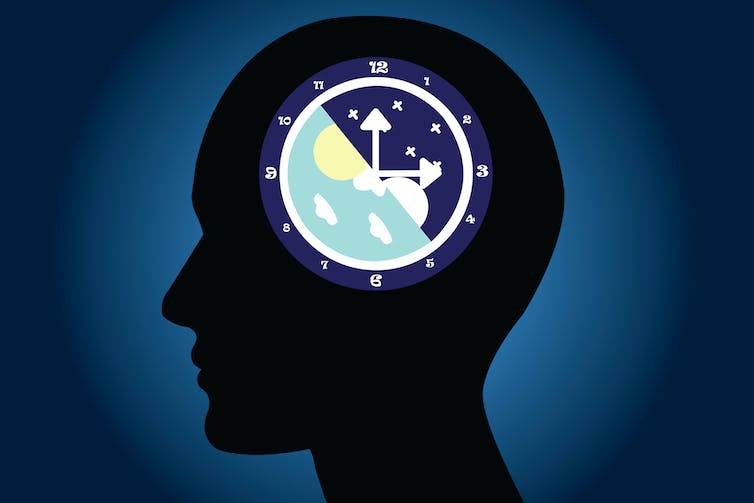 Our circadian rhythm is an important aspect of our health. kanyanat wongsa/ Shutterstock

Every living human is controlled by an internal “clock” which drives our circadian rhythm – the natural internal process that regulates our sleep-wake cycle during a 24-hour period. This internal clock controls most of our body processes over this period, including our sleep cycle, digestion, metabolism, appetite and immunity.

External light levels, eating times and physical activity all act to keep the body clock synchronised to the external environment. Every cell in our body also has its own clock, which helps keep these processes working so seamlessly. For example, clocks in individual tissues, such as the liver, work to ensure timely supply of energy to the rest of the body.

But our circadian rhythm can be disrupted by any number of factors, including going to bed later than usual, or eating late at night. While occasional disruptions are no cause for alarm, research shows that long-term circadian rhythm disruption can cause poor health. For example, many studies have found that regular shift work increases the risk of obesity and type 2 diabetes. And unfortunately, circadian rhythm disruption is becoming more common in our society, thanks in part to light pollution, noise and electronic devices, all of which could increase instances of these chronic health conditions.

But why is the body able to manage one-off instances of circadian rhythm disruption – such as staying up late on the weekend, or eating a late-night meal – without any health consequences? Our recent work looking at how the circadian rhythm controls metabolic processes to match our daily patterns of food intake holds the answer.

One important component of our body clock is a protein called REVERBα. It is one of the network of proteins which keeps our body clock “ticking” in each organ of the body. However, natural genetic variation of the REVERBα gene is linked to obesity in humans. Research has also found that mice lacking the gene in all tissues accumulate fat in and around their organs – and can become very obese when given a fatty diet.

We wanted to study more closely the action of REVERBα in the liver, as the liver is critical for maintaining energy balance, and its function is highly circadian, to cope with fasting during sleep. To do this, we used a new type of genetically modified mouse with the REVERBα gene deleted only in the liver.

To our surprise, we discovered that deleting REVERBα has relatively little impact. In particular, we didn’t see the accumulation of fat in the liver that we were expecting, and which is seen in animals which lack REVERBα in all tissues. However, when we mapped liver genes that were likely to be under the control of REVERBα, we found thousands – including genes that are major regulators of energy and fat metabolism.

So we had a paradox: a circadian clock regulator with an extensive range of targets in the liver, yet it was not essential for normal liver function. This raised two important issues. First, that under normal conditions REVERBα is ready, but not required to regulate fat metabolism. And second, that the earlier findings linking REVERBα to obesity (and to the accumulation of fat in multiple organs) might actually arise from body-wide cues.

Specifically, we thought that eating at unexpected times may be the cause for obesity. This is because mice lacking REVERBα throughout their body had an irregular eating pattern, especially feeding during their rest, or sleep period.

To test this idea, we analysed what happened when mice with REVERBα deleted in the liver were subjected to disrupted feeding schedules, rather like how shift work disrupts eating schedules. Here, we discovered that disordered feeding caused a major change in the expression of genes that control fat metabolism – but only when REVERBα was deleted from the liver. This suggests that REVERBα acts to smooth out the effects of disordered eating, as shown in our diagram below. 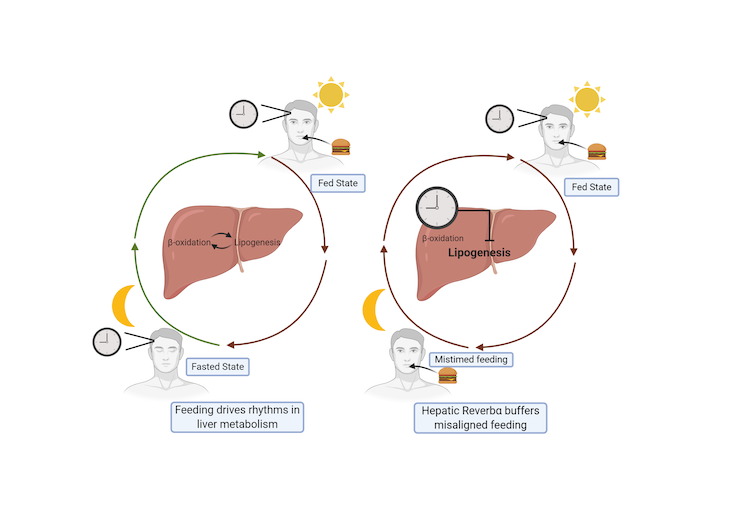 In this way, all the internal clocks embedded in our body’s tissues serve to protect against occasional changes in behaviour (such as the odd late-night meal). However, when we are constantly doing things that go against our natural circadian rhythm – such as always eating late, or working night shifts – this protective system is overwhelmed, leading to obesity and diabetes.

Our study therefore highlights the importance of eating meals in sync with the body clock, during the day. To keep our liver clock ticking – and to keep our whole circadian rhythm working properly – it’s important to develop an eating schedule that has a clear separation between the fed period (typically during the day), and the fasted period (typically during the night). This is hard for shift workers, depending on shift schedule, so strategies to help are urgently needed.