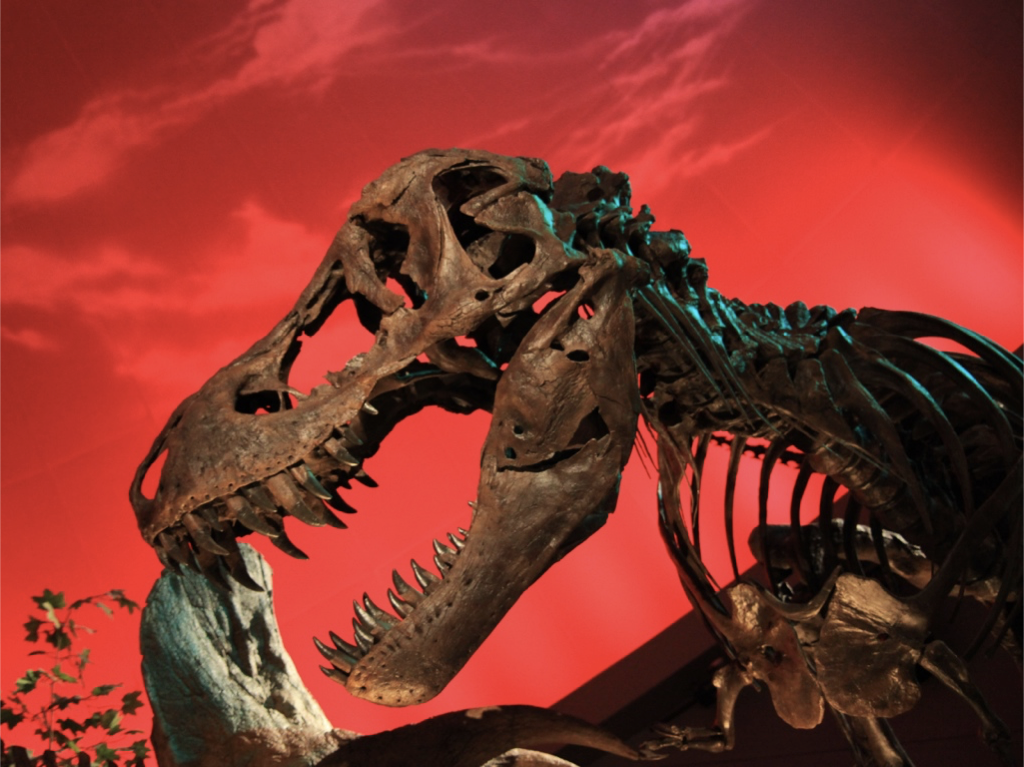 Palaeontologists at the University of Manchester have definitively proven there will never be a Jurassic Park after re-analysing collagen from a Tyrannosaurus rex bone discovered more than a decade ago.

It is probably the most common question Palaeontologists are asked by the public, “Could Jurassic Park become a reality?” The claims of protein sequences (peptides) surviving from a 68 million year old Tyrannosaurus rex fossil discovered ten years ago sparked the imagination of many scientists worldwide that, potentially, there may be hope one day.

Prehistoric proteins might well have supplied the first possible glimpse of the steps toward rebuilding dinosaurs. This discovery, however, was not met with universal acceptance and caused much debate among the scientific community. Subsequent analyses by the same team furthered this work with another dinosaur, this time the hadrosaur (duck-billed dinosaur), Brachylophosaurus. The main argument against this prior work was levelled at the possibility of bacterial contamination, but a more fundamental concern was the possibility of modern contamination from bones analysed in the laboratory.

Dr. Mike Buckley, from The University of Manchester’s School of Earth and Environmental Sciences, said: “The discovery of proteins in dinosaur bones sent a shockwave around the world, both among scientists and the public. It appeared that fiction was now being converted to fact through the application of new techniques.”

So a team based at the University of Manchester and at the National Museums Scotland, led by Dr Buckley, set out to explore the possibility of whether the claimed dinosaur peptides could have come from modern animals, given that ostriches and alligators that were known to be used by the labs in the original studies.

The Manchester team analysed samples of bone from three different ostriches, finding strong matches to all of the originally reported fossil peptides from both T. rex and Brachylophosaurus. These results highlight the need for robust authentication criteria when attempting to identify biomolecular sequence information from truly ancient fossilised material.

The discovery of proteins in dinosaur bones sent a shockwave around the world, both among scientists and the public. It appeared that fiction was now being converted to fact through the application of new techniques.

Dr. Buckley added: “Our work set out to identify the collagen fingerprints for both Ostrich and Alligator and was not intending to debunk the previous studies. However, we soon realised that our results were pulling the rug from beneath the paradigm that collagen might survive the ravages of deep time”.

Collagen is the key protein within bone that provides the flexibility in the skeleton and is intimately locked within the minerals that comprise bone. This ubiquitous material dominates both the archaeological and palaeontological record and can provide important information on both living and extinct organisms. However, the survival of collagen sequences beyond 3.5 million years old has not been achieved and validated by any other team.

Co-author and Professor of Natural History at The University of Manchester, Prof. Phil Manning, added: “The fossil record is offering new information on a daily basis through the application of new technology, but we must never forget that when results show us something that we really want to see, that we make sure of our interpretation. The alleged discovery of protein sequences in dinosaur bones has led many unsuccessful attempts to repeat these remarkable claims. It seems we were trying to reproduce something that was beyond the current detection limits of our science”.

The controls that are used to constrain the evolutionary relationships between extinct and existing orgranisms have to be completely isolated from the subject of study (i.e. the dinosaur bone), so that the highly sensitive techniques do not pick-up residues of misleading contaminants. This leading to a false ceiling for other scientists to achieve, which in reality is highly challenging.

Finally, Dr. Buckley added, “We are seeing something similar in our study, as to what happened with the ancient DNA world over 20 years ago when the scientific world had to recalibrate their aspirations when it came to the survival of this delicate molecule of life through deep time. It seems that the idiom that exceptional claims require exceptional evidence remains.”