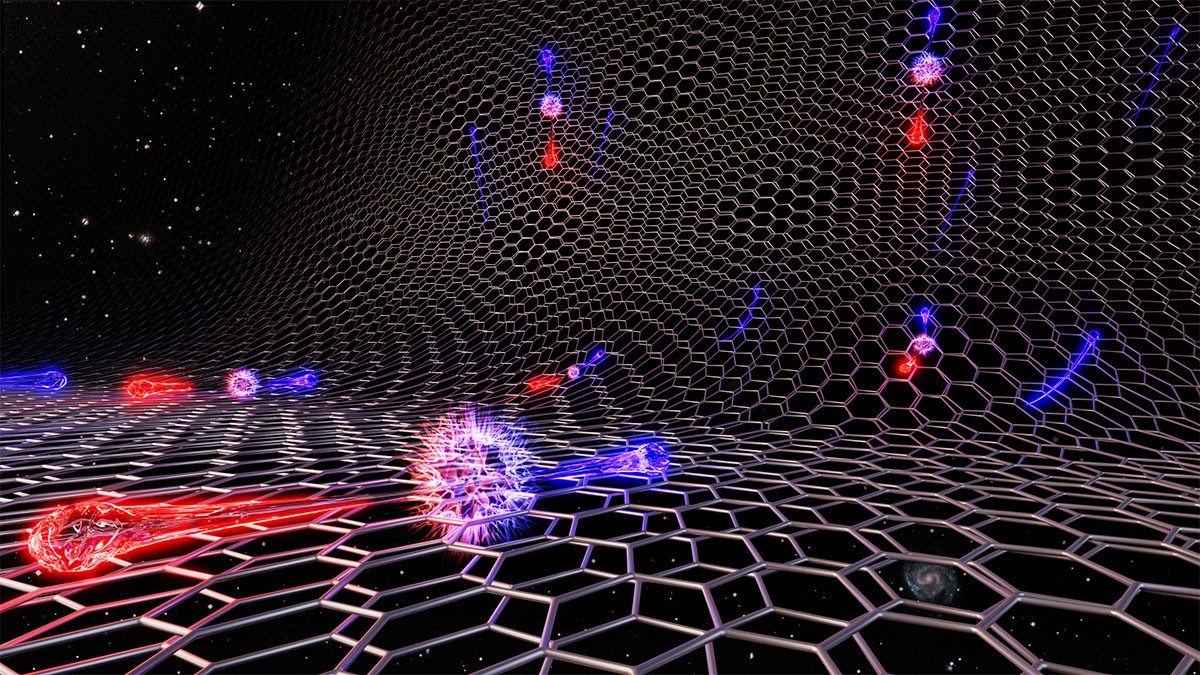 An international research team led by The University of Manchester has succeeded in observing the so-called Schwinger effect, an elusive process that normally occurs only in cosmic events. By applying high currents through specially designed graphene-based devices, the team - based at the National Graphene Institute - succeeded in producing particle-antiparticle pairs from a vacuum.

A vacuum is assumed to be completely empty space, without any matter or elementary particles. However, it was predicted by Nobel laureate Julian Schwinger 70 years ago that intense electric or magnetic fields can break down the vacuum and spontaneously create elementary particles.

This requires truly cosmic-strength fields such as those around magnetars or created transitorily during high-energy collisions of charged nuclei. It has been a longstanding goal of particle physics to probe these theoretical predictions experimentally and some are currently planned for high-energy colliders around the world.

Now an international, Manchester-led research team – headed by another Nobel laureate, Prof Andre Geim, in collaboration with colleagues from UK, Spain, US and Japan - has used graphene to mimic the Schwinger production of electron and positron pairs.

In the January 2022 issue of Science, they report specially designed devices such as narrow constrictions and superlattices made from graphene, which allowed the researchers to achieve exceptionally strong electric fields in a simple table-top setup. Spontaneous production of electron and hole pairs was clearly observed (holes are a solid-state analogue of subatomic particles called positrons) and the process's details agreed well with theoretical predictions.

The scientists also observed another unusual high-energy process that so far has no analogies in particle physics and astrophysics. They filled their simulated vacuum with electrons and accelerated them to the maximum velocity allowed by graphene’s vacuum, which is 1/300 of the speed of light.  At this point, something seemingly impossible happened: electrons seemed to become superluminous, providing an electric current higher than allowed by general rules of quantum condensed matter physics. The origin of this effect was explained as spontaneous generation of additional charge carriers (holes). Theoretical description of this process provided by the research team is rather different from the Schwinger one for the empty space.

“People usually study electronic properties using tiny electric fields that allows easier analysis and theoretical description. We decided to push the strength of electric fields as much as possible using different experimental tricks not to burn our devices,” said the paper’s first author Dr Alexey Berduygin, a post-doctoral researcher in The University of Manchester's Department of Physics and Astronomy.

Co-lead author from the same department Dr Na Xin added: “We just wondered what could happen at this extreme. To our surprise, it was the Schwinger effect rather than smoke coming out of our set-up.”

Another leading contributor, Dr Roshan Krishna Kumar from the Institute of Photonic Sciences in Barcelona, said: “When we first saw the spectacular characteristics of our superlattice devices, we thought ‘wow … it could be some sort of new superconductivity’. Although the response closely resembles those routinely observed in superconductors, we soon found that the puzzling behaviour was not superconductivity but rather something in the domain of astrophysics and particle physics. It is curious to see such parallels between distant disciplines.”

The research is also important for the development of future electronic devices based on two-dimensional quantum materials and establishes limits on wiring made from graphene that was already known for its remarkable ability to sustain ultra-high electric currents.