Could you break the code and find Alan Turing’s buried treasure?
Newsroom

Could you break the code and find Alan Turing’s buried treasure? 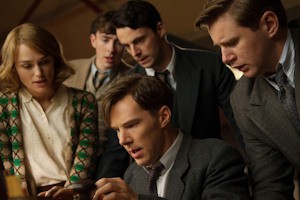 A new fiendishly-challenging online brain-teaser, featuring cryptic clues, has been launched by mathematicians at The University of Manchester.

The online cryptography competition has been designed to coincide with the launch of the film ‘The Imitation Game’, which tells the real-life story of mathematician Alan Turing, who is credited with cracking the German Enigma Code.

The cryptic conundrum is based around a true story of how in 1940, Alan Turing converted his savings into silver ingots and buried them in Bletchley Park.  In real life the silver has never been found, but for the purposes of the competition, a location has been chosen and three coded clues are there to be deciphered.  The answers to the clues can then be used to find the location of the silver.  Participants submit their solution and winners, who will be drawn at random from correct solutions, receive film-related merchandise kindly donated by StudioCanal, distributors of the film.

Turning, who was a pioneer of computing, artificial intelligence and mathematical biology had close links with the University of Manchester.  In 1948 he was appointed Reader in the Mathematics Department and soon afterwards he became Deputy Director of the Computing Laboratory at the University, working on software for one of the earliest true computers - the Manchester Ferranti Mark 1.  Actor Benedict Cumberbatch, who plays Turing in the film, also has ties to the city and The University, where he was a former drama student.

Dr Andrew Hazel from the School of Mathematics said, “Having seen our annual online Alan Turing Cryptography Competition, StudioCanal contacted us to propose a one-off competition related to the release of The Imitation Game. We were delighted to take the opportunity to share our enthusiasm for mathematics and cryptography, and to highlight the close ties between the University, Alan Turing and Benedict Cumberbatch.”

The Imitation Game Cryptography Competition will close at midday on 28th November 2014.  It is free to enter and open to any resident of the United Kingdom but only one prize will be awarded per household.  Full details available online.

The competition can be found along with full details of rules of entry at http://man.ac.uk/997FdN

About Alan Turing and the University

During his time at The University of Manchester, Alan Turing proposed a famous experiment now known as the Turing test, an attempt to define a standard for a machine to be called `intelligent‘. The idea was that a computer could be said to `think’ if it could fool an interrogator into believing that the conversation was with a human.

In 1952 Alan Turing turned his attention to the then emerging field of morphogenesis, proposing a new hypothesis for pattern formation in biological systems. Tragically, Turing did not have time to further develop his ideas in this area; he died on the 7 June 1954, at the age of 41.

In recognition of his achievements, the home of The School of Mathematics at The University of Manchester, completed in 2007, was named the Alan Turing building. The building also houses the Photon Science Institute and the Jodrell Bank Centre for Astrophysics.

The competition will conclude with The Second Alan Turing Cryptography Day on Wednesday 29th April 2015. Registration for the fourth edition of the Competition will open December 1st.  More information available at http://www.maths.manchester.ac.uk/cryptography_competition/

Based on the real life story of Alan Turing (played by Benedict Cumberbatch), who is credited with cracking the German Enigma code, THE IMITATION GAME portrays the nail-biting race against time by Turing and his brilliant team at Britain's top-secret code-breaking centre, Bletchley Park, during the darkest days of World War II. Turing, whose contributions and genius significantly shortened the war, saving thousands of lives, was the eventual victim of an unenlightened British Establishment, but his work and legacy live on.