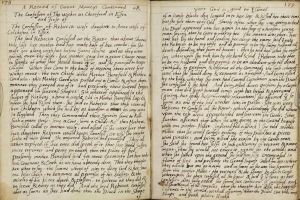 A 350-year-old notebook which describes the execution of innocent women for consorting with the Devil, has been published online by The University of Manchester’s John Rylands Library.

Puritan writer Nehemiah Wallington wrote passages on his attitudes to life, religion, the civil war as well as the witchcraft trials of the period.

By 1654 Wallington catalogued 50 notebooks, of which only seven are known to survive.

Each is unique, and the Tatton copy documenting battles and skirmishes of English Civil War period and the disturbing violence of the 1640s in which dozens East Anglian women were killed.

Last year, a team of experts from the John Rylands’ Centre for Heritage Imaging and Collection Care (CHICC) team funded by JISC, spent a week at Tatton Park, Cheshire, to capture the document on camera.

Wallington tells how a supposed coven of witches was found in the Essex village of Manningtree.

Manningtree is the home village of Witchfinder General Matthew Hopkins, notorious for his brutality against women.

In 1645 Hopkins had been appointed to examine villager Elizabeth Clarke for ‘devil’s marks’ like warts or moles.

Under torture, she named other women, including her daughter Rebecca. When Rebecca was herself tortured, she implicated her own mother as a witch.

A total of 19 women were eventually hanged, though Rebecca was saved thanks to her confession.

At the Chelmsford trial in July 1645, Wallington wrote about Rebecca.

On the ‘many witches in Essex, Suffolk and Northfolk’, he wrote:
“July the XX111 there were at Least XXXV111 wiches imprisoned in the Town of Ipswich…divers of them voluntarily and without any forcing or compulsion freely declare that they have made a covenant with the Devill, to forsake God and Christ ant to take him to be their Master and Like wise do acknowledge that divers Cattell; and som Christians have been killed by their meanes …By this wee may see the grand delusions and impostures of Satan by which we works upon men & women in these Latter times of the world What sins so hanious what crimes so grevious will not they run in to from whom God is gone’

James Robinson, Senior Photographer at  the John Rylands Library, said: “Our work at Tatton Park  involved careful documentation of each and every page of this fragile and important notebook.

“We’re delighted the public, free of charge, will now be read for themselves the horrors of that period.”

Tatton Park Mansion and Collections Manager Caroline Schofield said: “Nehemiah Wallington, a turner by trade and a Christian by religion, was an intelligent working man battling with the adversities of life in the seventeenth century.

Of his brood of children only his daughter Sarah survived into adulthood.

“At times he doubted his salvation to the degree that he suffered a mental breakdown and tried to take his own life.

“He began to keep his diaries in an effort to record his own sins and God’s mercies.

“The Wallington manuscripts are hugely important primary sources for scholars of the period.”

Caroline Schofield and Jamie Robinson are available for comment.