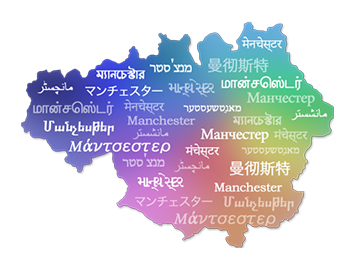 A team of researchers from The University of Manchester has embarked on a project to map multilingual signs around the city, in an effort to raise awareness of its language diversity.

Manchester is one of the country’s most diverse cities, where 37% of schoolchildren speak another language in addition to English. It is estimated that more than half of the city’s adult population is multilingual, with around 17% declaring on the 2011 Census that their ‘main’ language was something other than English.

The Multilingual Manchester project surveyed signs that included other languages in addition to English on the city’s shops and public buildings. They also examined posters, leaflets and noticeboards in libraries, medical centres, and shopping outlets.

In a sample of over 1,000 items, the team counted 51 different languages written in 16 different alphabets. The most common languages were Urdu, Chinese, Arabic and Polish, reflecting the size of the populations that speak these languages in the city. There are also many signs in Kurdish, Persian, Czech and Somali - and their numbers seem to be growing, as residents from these backgrounds become more active in setting up local businesses.

The team carried out their survey with the help of students and members of the public, using a specially developed smartphone app called LinguaSnapp to take pictures of signs and record their location and other details. The images were uploaded onto an online map, which can be seen at www.linguasnapp.manchester.ac.uk.

Professor Yaron Matras, who led the project, said: “The great variety of languages in Manchester’s linguistic landscape shows that minority languages play an important role in a city’s commerce, as well as in its culture and public services. It shows that the people who speak these languages feel at home in Manchester and are confident to display their heritage, and that the city’s public institutions make an effort to be inclusive.”

We hope that many more residents will engage with LinguaSnapp, and help us to document the ever-changing public face of the city’s language landscapes.

Manchester City Council has now added the app to its online Statistics and Intelligence Hub, and is working to expand the resource with the Multilingual Manchester team in order to map language needs and skills, and to raise awareness of the city’s language diversity.

‘The spatial construction of civic identities: A study of Manchester’s linguistic landscapes’ is available here: http://mlm.humanities.manchester.ac.uk/wp-content/uploads/2016/12/ManchesterLinguisticLandscapes.pdf