A team including researchers from The University of Manchester’s National Graphene Institute (NGI) has revealed that sonic boom and Doppler-shifted sound waves can be created in a graphene transistor, giving new insights into this advanced material and its potential for use in nanoscale electronic technologies.

When a police car speeds past you with its siren blaring, you hear a distinct change in the frequency of the siren’s noise. This is the Doppler effect. When a jet aircraft’s speed exceeds the speed of sound (about 760 mph), the pressure it exerts upon the air produces a shock wave which can be heard as a loud supersonic boom or thunderclap. This is the Mach effect.

Scientists from universities in Loughborough, Nottingham, Manchester, Lancaster and Kansas (US) have discovered that a quantum mechanical version of these phenomena occurs in an electronic transistor made from high-purity graphene. Their new publication: “Graphene’s non-equilibrium fermions reveal Doppler-shifted magnetophonon resonances accompanied by Mach supersonic and Landau velocity effects” was published in Nature Communications on 4 November.

The research team used strong electric and magnetic fields to accelerate a stream of electrons in an atomically-thin graphene monolayer composed of a hexagonal lattice of carbon atoms. At a sufficiently high current density, equivalent to around 100 billion amps per square metre passing through the single atomic layer of carbon, the electron stream reaches a speed of 14 kilometers per second (around 30,000mph) and starts to shake the carbon atoms, thus emitting quantised bundles of sound energy called acoustic phonons. This phonon emission is detected as a resonant increase in the electrical resistance of the transistor; a supersonic boom is observed in graphene! 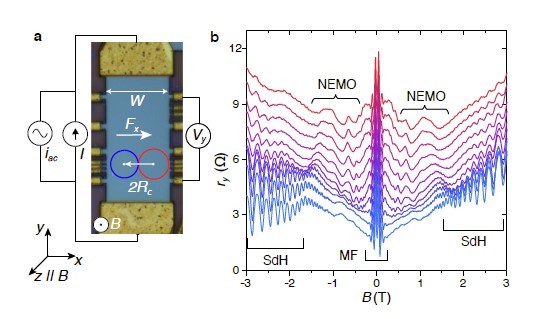 The researchers also observed a quantum mechanical analogue of the Doppler effect at lower currents when energetic electrons jump between quantised cyclotron orbits and emit acoustic phonons with a Doppler-like up-shift or down-shift of their frequencies, depending on the direction of the sound waves relative to that of the speeding electrons. By cooling their graphene transistor to liquid helium temperature, the team detected a third phenomenon in which the electrons interact with each other through their electrical charge and make “phononless” jumps between quantised energy levels at a critical speed, the so-called Landau velocity.

The devices were fabricated at the NGI in Manchester (see 'a' pictured above, where W=15μm). 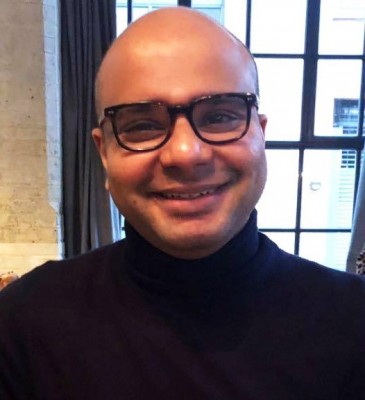 Dr Piranavan Kumaravadivel (right), who led device design and development, said: “The large size and high quality of our devices are key for observing these phenomena. Our devices are sufficiently large and pure that electrons interact almost exclusively with phonons and other electrons. We expect that these results will inspire similar studies of non-equilibrium phenomena in other 2D materials.

Dr Mark Greenway, from Loughborough University, one of the authors of the paper commented: “It is fantastic to observe of all these effects simultaneously in a graphene monolayer. It is due to graphene’s excellent electronic properties that we can investigate these out-of-equilibrium quantum processes in detail and understand how electrons in graphene, accelerated by a strong electric field, scatter and lose their energy. The Landau velocity is a quantum property of superconductors and superfluid helium. So it was particularly exciting to detect a similar effect in the dissipative resonant magnetoresistance of graphene.”