As part of the The University of Manchester’s annual Foundation Day celebrations Dr Amani Abou-Zeid was awarded an honorary doctorate in recognition of her work. 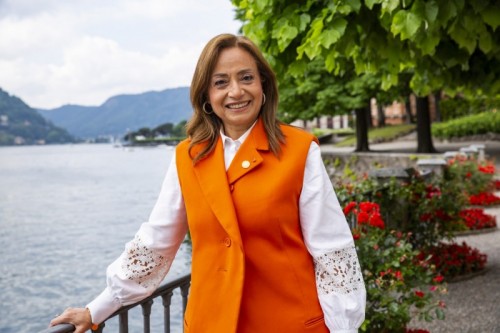 Below is the citation of Dr Amani Abou-Zeid by Professor David Hulme.

Chancellor, distinguished guests and colleagues I am privileged and honoured to present Dr Amani Abou-Zeid to you today.

To cover all of Dr Abou-Zeid’s achievements would take many hours but I’ll cram them into a nutshell. Dr Abou-Zeid graduated from the University of Manchester with a PhD in Socio-economic Development in 2001. She had great intellectual ability and great energy – successfully studying for a Masters degree at Harvard University while writing up her doctoral thesis. Over the 30 years of her distinguished career she has become one of the University’s leading alumni in the sphere of international development. Her links with Manchester continue - Amani chairs the Global Development Institute’s International Advisory Board for the African Cities Research Centre.

Dr Abou-Zeid, who is from Egypt, has served in leadership roles at international organisations including the United Nations Development Programme. Her early career focus on poverty reduction has broadened into infrastructure and energy programmes.  In 2017, she was elected as Commissioner for Infrastructure and Energy at the African Union, the multilateral body which promotes cooperation and development in its 55 member states. Amani was re-elected for a second term in February 2021. She has advanced many programmes at the AU including the Single African Air Transport Market and the Broadband Commission for Africa.

Dr Abou-Zeid has received numerous international awards for her leadership and professional excellence. Accolades include being selected as one of Africa’s 100 Most Influential Women, being decorated by HM King Mohamed VI of Morocco, and being recognised as a World Young Leader by the European Union. In her spare time Amani competes regularly at desert car rallies.

Three aspects of Dr Abou-Zeid’s distinguished career stand out. First, her personal commitment to seeking to make the world a better place. The programmes she has run pursue the goal of social inclusion and not just economic growth: this is the contemporary challenge for the African continent. Second, Amani has shown the benefit of inter-disciplinary approaches to real-world problem solving. Her BSc is in Electrical Engineering, she has an MBA in Project Management and her PhD research focussed on the socio-economic analysis of poverty-reduction programmes. Third, Dr Abou-Zeid sets an example for women in high-level leadership positions. Her career has been in male-dominated institutions, but she has successfully broken through glass ceilings and championed gender equality. She provides an outstanding role model for the next generation.

Chancellor, I am very pleased to present Dr Amani Abou-Zeid to you for the Degree of Doctor of Social Science honoris causa.