Dr Holly Morse, Lecturer in Bible, Gender and Culture in the Department of Religions and Theology, has published a new volume offering a re-evaluation of the meanings and myths of Eve. 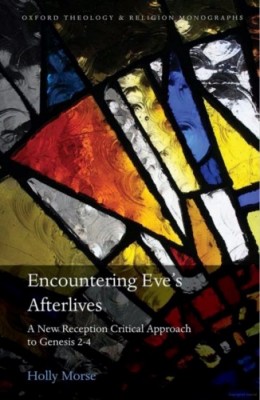 Encountering Eve’s Afterlives: A New Reception Critical Approach to Genesis 2-4, published by Oxford University Press for their Oxford Theology and Religion Monographs series, deconstructs the dominance of Eve’s cultural incarnation as a flawed female and reconstructing a more nuanced presentation of the first woman’s role in the Bible and beyond.

Dr Morse aims to destabilise the persistently pessimistic framing of Eve as a highly negative symbol of femininity within Western culture by engaging with marginal, and even heretical, interpretations that focus on more positive aspects of her character. In doing so, this book questions the myth that orthodox, popular readings represent the ‘true’ meaning of the first woman’s story, and instead explores the possibility that previously ignored or muted rewritings of Genesis 2-4 are in fact equally ‘valid’ interpretations of the biblical text that allow a more complex image of Eve as a knowledge bearer and a mourning mother to emerge.