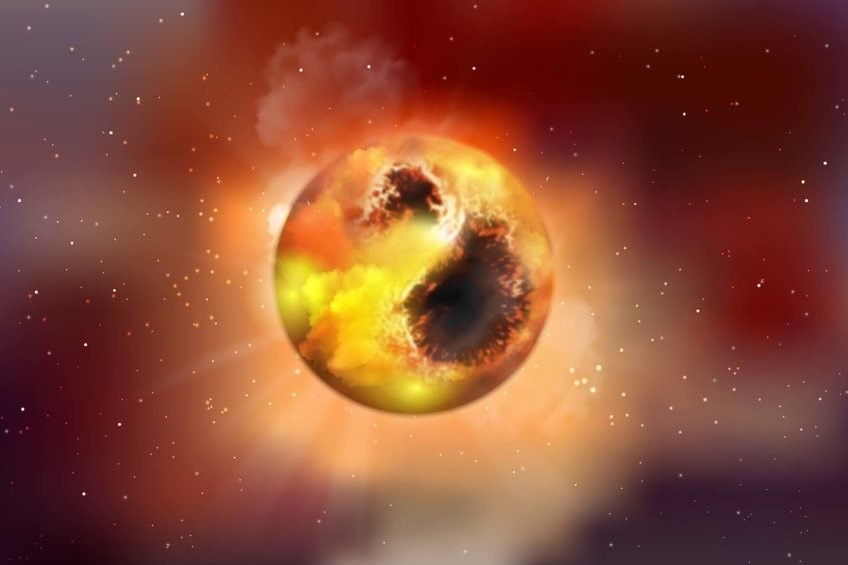 In late 2019 the red supergiant closest to Earth, Betelgeuse, began to rapidly fade in brightness. Initially thought to be a sign that the star was about to go supernova or that it experienced a dust storm, scientists have now found that it was caused by a gigantic star spot 10% colder than the rest of the star’s surface.

Betelgeuse is the bright red star at the top left of the constellation of Orion around 500 light years from Earth. As a so-called red supergiant, the star is 900 times larger than the Sun and reaching the end of its life. In late 2019, the star suddenly began to fade and by February 2020 it was only half as bright as before.

If Betelgeuse replaced the Sun at the centre of the Solar System, the Earth and Mars would be inside the star and Jupiter would be skimming its surface. The cause of its sudden fading was unclear and scientists initially thought it could be caused by a dust cloud forming around the star, or that the star was about to go supernova. This did not happen and the star instead began to recover and by May 2020 it was back at its original brightness.

Now an international team of astronomers have used radio telescopes to find the true cause of the fading. They used the James Clerk Maxwell Telescope (JCMT) in Hawaii. This telescope, built by the UK and operated by the East Asian Observatory in Taiwan, detects the light coming from dust grains that have formed around the star. The astronomers discovered that this emission had also decreased.

For comparison, a typical sunspot is the size of the Earth. The Betelgeuse star spot would be a hundred times larger than the Sun. The sudden fading of Betelgeuse does not mean it is going supernova. It is a supergiant star growing a super-sized star spot.

The global collaborative effort included Albert Zijlstra and Iain McDonald from The University of Manchester and involved astronomers from Germany, the US, Chile. It was led by Thavisha Dharmawardena of the Max Planck Institute for Astronomy.

Publishing their findings today in The Astrophysical Journal Letters the team confirm that the fading was not the result of dust particles but instead by the formation of star spots now covering up to two-thirds of Betelgeuse. The observed star spots have a temperature of 3500 Celsius, around 10% cooler than the rest of the star’s surface.

Professor Albert Zijlstra from The University of Manchester was an author of the new research findings. “For comparison, a typical sunspot is the size of the Earth. The Betelgeuse star spot would be a hundred times larger than the Sun. The sudden fading of Betelgeuse does not mean it is going supernova. It is a supergiant star growing a super-sized star spot.” said Prof Zijlstra.

The paper, Betelgeuse fainter in the sub-millimetre too: an analysis of JCMT and APEX monitoring during the recent optical minimum, by Thavisha E. Dharmawardena, et al. is published in The Astrophysical Journal Letters (2020)