Why England’s new litter strategy is actually a bit rubbish

Earlier this year, England got its first ever litter strategy, it was a moment of triumph.

Earlier this year, England got its first ever litter strategy. It was a moment of triumph for groups such as Keep Britain Tidy, which have campaigned for action over decades. Citing the long-established evidence that litter costs taxpayers billions to clean up, is bad for business and makes people depressed and angry, the government finally declared war on rubbish. There’s just one problem: this strategy is unlikely to lead to a victory. 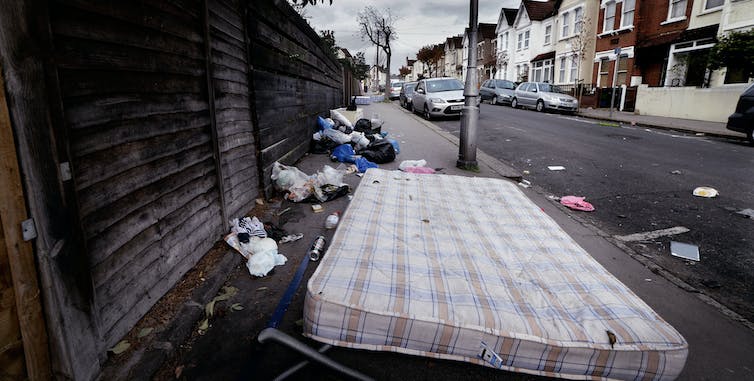 According to the strategy, which is set to be put into practice over the course of this parliament, the war will be waged primarily through behaviour change tactics. The enemy – otherwise known as the “litter lout” – will be conquered through a combination of education and punishment. The troops will be recruited from the people who live in the trash-strewn streets of English towns and who visit the windswept, plastic-littered beaches of its coasts.

Introducing the strategy, the Minister for Local Government, Marcus Jones MP, lamented that England’s public spaces are being spoiled by “the behaviour of a selfish minority”. But this simplistic focus on the litterer overlooks the other significant causes of one of England’s messiest problems.

No doubt some litter is dropped intentionally. Studies suggest that young men on low incomes are the most likely culprits. These lads can be lazy, disrespect the local environment, or simply get their kicks from flouting authority. Some rubbish is also illegally dumped by builders and traders to avoid landfill charges. They take advantage of hidden alleyways, free council clear-ups, and a general perception that no one in an already messy (and usually deprived) area will care.

But my research in Moss Side, in the city of Manchester, suggests that much of the litter which defiles cities is the unintended result of deep structural issues.

Austerity cuts have meant that the local authority has fewer resources to cope with rubbish. Wheelie bins were reduced in volume by 100 litres in 2016, to nudge people to produce less waste and recycle more, but today they are often filled beyond capacity, leaving escaped rubbish blowing in the wind. Bits of trash get kicked into the streets by overworked bin men. Hard-up people search bins for food and other valuables, leaving rubbish on the ground. Birds and animals pick through bags, distributing waste far and wide. 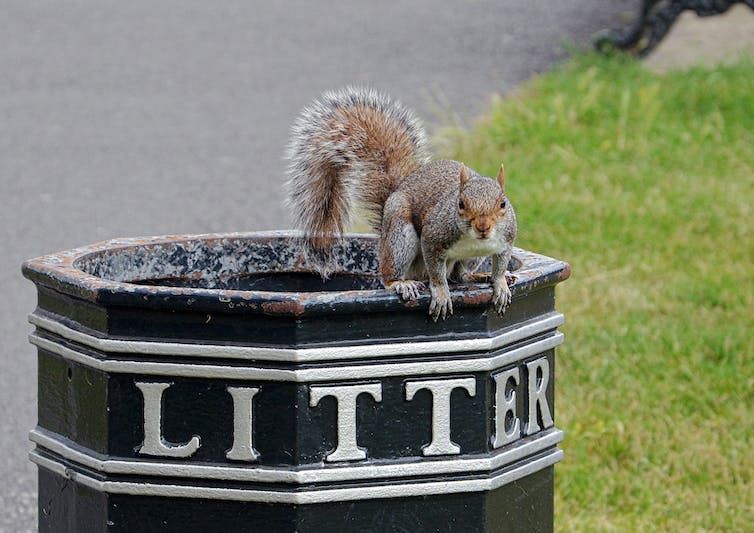 Even though the strategy makes brief mention of some of these other causes, the complexity of the problem is obscured by its narrow focus on individual behaviour change and the need for education. Yet this line is hard to swallow in Moss Side, which is home to a large population of students studying at universities with award-winning sustainability education programmes. Locals regularly find students’ unwanted stuff, uneaten food and reams of recyclable course notes in back alleys, before it all gets cleared at the council’s expense, or scattered by the breeze.

My research raises some important challenges to the litter strategy, based on doorstep interviews and focus groups with local people – several of whom are community activists with a Manchester Clean City award-winning group called Upping It.

The strategy champions litter-picking by “huge numbers of enthusiastic and dedicated volunteers” and seeks to empower community groups to do more by establishing awards and national cleaning days, similar to Clean for the Queen in 2016. But activists on the front lines aren’t convinced that volunteers are always best placed to tackle the local litter problem in their neighbourhoods.

Poor people tend to live in poor environments, and often lack the power needed to change their circumstances. As a result, communities with the worst rubbish problems are also most likely to feel defeated by it, and least capable of self-organising in response. According to a 2015 profile, Moss Side’s population is dominated by transient singles in low-rent, shared housing, and over 60% of households contain people who require high or very high levels of support. 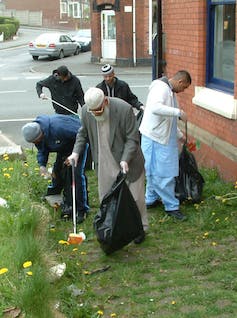 'Not easy for everyone'. St Peters Community News, CC BY-SA

The matter of transience and the impacts of austerity in places like Moss Side mean that there are fewer people with the necessary skills, time and networks to take action. While the litter strategy acknowledges research on this point, its response is to promote the use of rubbish reporting apps and emotive messages to motivate people in deprived areas to join the battle against the mess which blights their lives.

But even if these communities could be trained up and empowered, the question remains whether it is right that local people should take on the job of cleaning up litter when the government’s strategy is so soft on its producers.

Straight to the source

The litter strategy seeks to “reduce the potential for packaging to become litter”, mostly by using anti-litter labels on packaging. There is very little that indicates an intention to regulate and legislate at the source; litter lies at the end of process that involves production, consumption and disposal – this is a chain in which the consumer (and potential litterer) is the weakest link, with the least power.

While the authors embrace the unproven theory of nudge without question, they suggest that more research is needed before implementing tried and tested schemes, which have been proposed, or proven effective in other countries.

This twisted logic has resulted in a strategy that nudges people to bin their fag-ends rather than requiring manufacturers to make them nontoxic and biodegradable; one which encourages communities to organise regular clean ups, rather than penalising fast food companies when their branded litter is found in the street; one which makes recycling easier for individuals, but fails to implement reverse vending (which rewards recyclers with cash) or ban the sale of single-use plastic packaging, as has been done in Costa Rica and Kenya.

Educating individuals and empowering communities will not put an end to the volumes of packaging that blight urban spaces. Reducing litter at its source and moving towards a “zero waste society” – as embraced by the Scottish government – has to be the number one tactic in the battle against litter.