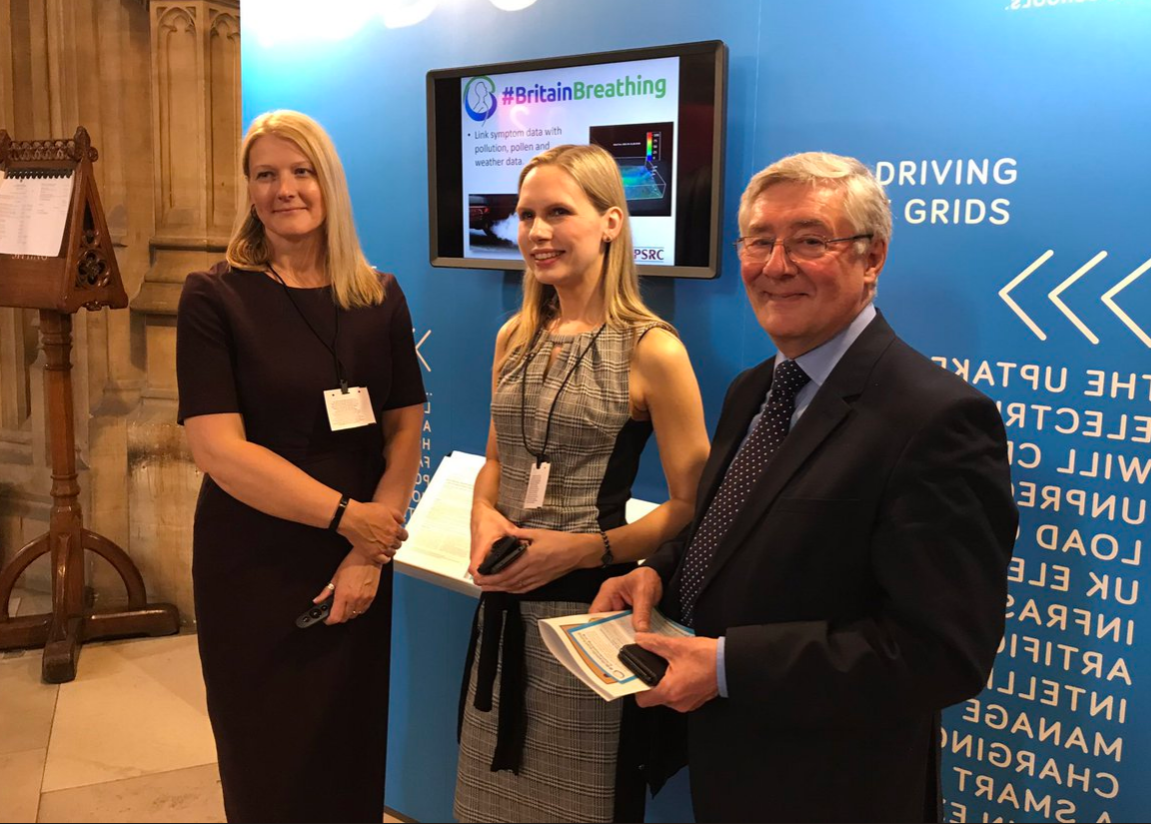 Two teams of researchers attended Evidence Week in Parliament to provide expert briefings in the form of ‘evidence pods’ on cutting edge research from across The University of Manchester.

Professor Sheena Cruickshank and Dr Caroline Jay showcased the “Britain Breathing” app which allows users to record their experiences of seasonal allergies and asthma on their smartphones. By combining this information with roughly where users are in the country, researches can investigate what factors may be causing their symptoms.

Britain Breathing is an example of the new trend towards “citizen science”, where members of the public provide data to help researchers to make new breakthroughs in medical and scientific research. Citizen Science datasets can be as diverse as allergy symptoms, insect diversity, or even defining exoplanets.

Professor Cruickshank explained, “Britain Breathing is breaking new ground in how we understand allergies and asthma. We worked with allergy and asthma sufferers to build an app that was helpful to them as well as helping our research.”

“Participants using the app learn more about their own allergies by monitoring and recording their symptoms, whilst contributing to ongoing research into why allergies and asthma are increasing and the role of pollution in this increase”

Alongside the Britain Breathing demonstration, researchers from Tyndall Manchester were demonstrating an online tool to help local areas set their own climate change targets aligned with the UN Paris Agreement on climate change based on the latest science,.

Dr Chris Jones explained “Across the UK local people, businesses and government want to know what their contribution to tackling climate change through meeting the Paris Agreement looks like. Giving local stakeholders support to do this helps unlock valuable contributions to cutting carbon driven from the local level, and it’s great to see MPs coming to find out more about this and hopefully getting more involved in climate action”.

Dozens of MPs and Peers got involved to hear about one or both of these projects, as well as select committee staff and party advisors. Former chair of the House of Commons Science and technology committee Stephen Metcalfe MP explained why this sort of activity is invaluable:

Parliamentarians need a degree of scepticism to challenge and scrutinise what the evidence is and where it comes from. Initiatives like Evidence Week and organisations like Policy@Manchester can be a huge help to Members, forging the link between ourselves and top academics so we are up to date with the latest science.

Evidence Week brings together MPs, peers, parliamentary services and people from different walks of life across the UK to talk about why evidence matters.

You can read about The University of Manchester’s presence at the inaugural Evidence Week in 2018.