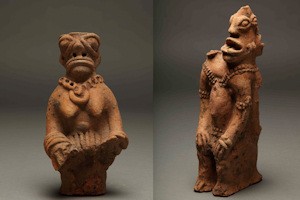 Secrets of sixty remarkable clay figurines - up to 1,400-years-old and excavated by archaeologists from The Universities of Ghana and Manchester, and the Ghana Museums and Monuments Board (GMMB)– are to be revealed at an exhibition starting this week (October 25).

The beautiful objects - up to 31cm in height - will take pride of place at the Manchester Museum, part of the University, the first time they will be seen publicly outside Ghana.

The figurines, including two-headed humans, a chameleon, a crocodile and a man on horseback, are thought by the team to have been used to invoke the help of ancestors to cure illnesses.

Using computed tomography scanning techniques at The University of Manchester, the team revealed hidden channels within the objects which they think had a medicinal function, used for liquid ritual offerings.

The figurines show people with congenital conditions including anencephaly - which still affects children in Africa today.

Others depict costumes, ornaments and weapons that were worn and used, as well as animals that had symbolic roles.

Some figurines in the collection were also possibly ‘scapegoats’, intended as the focus or recipient of disease and misfortune rather than their human keepers.

The figures have been dated to between the 6th and the 14th centuries.

The figurines were found in a village called Yikpabongo in Koma Land in the north of Ghana. They come from two mounds thought to be used as a shrine by the makers of the objects.

Because the figurines are highly sought after in the art market, some mounds in the region have been illegally excavated.

They have been added to the International Council of Museums Red List, a register of archaeological material at risk.

Professor Kankpeyeng said: “These figurines are unique to the region and offer an insight into aspects of past human beliefs, ways of understanding and creativity.

“This has not always been possible, where there is no tradition of making representations, or when they simply have not survived.

“Their exquisite and consistent appearance obviously required a great deal of skill, suggesting those who made them were a specialist occupation.

“Unfortunately, some of the mounds have been illegally excavated to obtain figurines to sell and The Ghana Museums and Monuments Board and other national, regional, and local stakeholders continue working hard to combat this.

“The people of the villages of Koma Land have a keen sense of the figurines as part of their heritage and deeply resent the unethical trade in such material.”

Professor Insoll said: “Little is known about the people who made the figurines, who have no connection with Koma Land’s current inhabitants.

“In fact, we know little in general about the past in this part of Ghana, because there are few historical sources before the late 19th century and oral traditions are scarce.

“But archaeology is unlocking some of the secrets of the past, and this project shows what can be achieved.

“We now know the figurines may have had ritual and medicinal functions  and the mounds  they were found in were perhaps medicine shrines, or places for disposal of material considered dangerous.

“We also know these people were farmers, who traded with cowry shells, used iron tools and lived in villages, with complex religious beliefs.

“The horse or camel and rider figurine indicates awareness of animals used in long distance travel.

“The people of the villages of Koma Land in Ghana are involved in this fieldwork and have a keen sense of the figurines as part of their heritage.

“So we are proud that this exhibition actively involves Ghanaian archaeologists and museum curators who are coming to Manchester to support it.”

Fragmentary Ancestors: Figurines from Koma Land, Ghana takes place from Fri 25 Oct 2013 - Mon 5 May 2014. Entry is free. For further details of events associated with the exhibition visit  www.manchester.ac.uk/museum. The Museum is open from 10am-5pm every day.

This exhibition is supported by a People Award from the Wellcome Trust and The Zochonis Charitable Trust and has developed in partnership with the University of Ghana and the Ghana Museums and Monuments Board.

Journalists are welcome to visit the exhibition on 24th October

About the Wellcome Trust: The Wellcome Trust is a global charitable foundation dedicated to achieving extraordinary improvements in human and animal health. It supports the brightest minds in biomedical research and the medical humanities. The Trust’s breadth of support includes public engagement, education and the application of research to improve health. It is independent of both political and commercial interests. www.wellcome.ac.uk