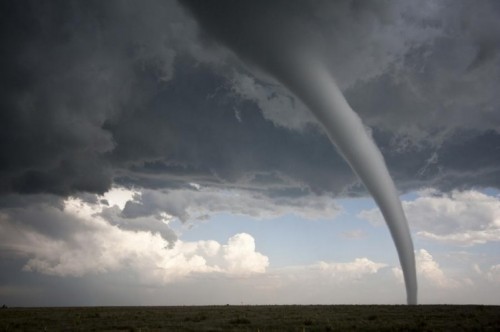 Researchers from The University of Manchester have published a review of the current knowledge on tornadoes in Europe. The paper, the first of a series that will be published over the next year, is the first exhaustive study of the subject to be undertaken in nearly a century, and the scientists hope that it will lead to an increased understanding and more accurate forecasting.

Dr. Bogdan Antonescu and Professor David M. Schultz, in collaboration with Fiona Lomas and Thilo Kühne, felt the need to undertake the research as the threat of tornadoes to Europe is not widely recognised, meaning that many national meteorological services do not even forecast them - this has resulted in an underestimate of the risk associated with tornadoes. There was also a lack of knowledge about the possible influence of climate change, as the current spatial and temporal distribution and intensity of tornadoes across Europe was not known.

They worked together to analyse all the articles on tornadoes published in peer-reviewed meteorological and atmospheric science journals since 1800, as well as reviewing other sources including case studies, annual reports, historical scientific papers, conference talks and tornado databases maintained by individual countries or organisations. The result is a synthesis of tornado observations across Europe over the past two centuries which they have used to produce a pan-European tornado climatology.

This research is a start at improved understanding of where tornadoes form in Europe.  Once we know where tornadoes occur, we can start to better understand why they occur, and how we can do a better job forecasting them.

It is anticipated that the findings will encourage further discussions and stimulate the interest of the scientific community, national meteorological services and the public, as well as identifying new sources that would allow an extension of the current European database. The team behind the review also hope that it will lead to tornadoes being seen as a pan-European problem, rather than something to be tackled by individual countries.

Dr. Bogdan Antonescu said: “To our knowledge, this is the first exhaustive study of the literature on tornadoes in Europe in nearly a century. This is really important if we want to understand European tornadoes and their associated risk.”