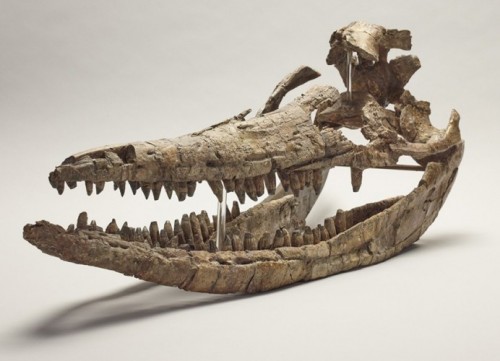 A palaeontologist from The University of Manchester has taken part in a project to rebuild and redisplay the skeleton of a 200 million-year-old sea creature, 61 years after its bones were discovered in a field in Warwickshire. The Ichthyosaurus is the largest example ever found in the UK, and it is now available for the public to view for the first time.

Ichthyosaurs evolved from a group of land reptiles that returned to the sea, just as modern dolphins and whales evolved from mammalian land ancestors – in fact, they look a lot like dolphins. They belong to a different group of reptiles from dinosaurs, but they did live in the sea at the same time as dinosaurs were living on the land.

Dean Lomax from The University of Manchester worked with palaeontologist Nigel Larkin and Luanne Meehitiya at Birmingham Museums to create accurate 3D replicas of the Ichthyosaurus’ missing bones, by using CT scans of the existing fossilised remains.

Its skull, which is 80cm long and 33cm wide, was cleaned before being completely taken apart and reconstructed to be more anatomically correct, as our knowledge of ichthyosaurs has increased since it was first put together. Once the skull had been reassembled, the project team found the rest of the skeleton in storage, and began to piece the whole creature together. Replicas were made of any missing bones to complete the jigsaw.

This is a very important specimen. Not only is this the largest recorded Ichthyosaurus in the UK, but possibly in the world. It also comes from a location previously unrecorded for ichthyosaurs, so this adds to our understanding of the geographical distribution of ichthyosaurs during the Early Jurassic, a time when the UK was a series of islands.

Dean Lomax of the School of Earth, Atmospheric and Environmental Sciences
„

As well as the skeleton, the experts have created a life-sized model of the ichthyosaur to show how it looked when alive, as well as an interactive digital version telling the story of the project. These are now on display at Birmingham Museum.