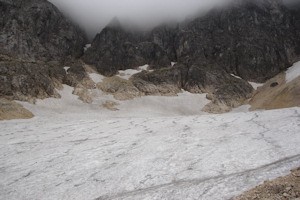 A team of geographers from The University of Manchester have discovered a group of glaciers in one of Europe's most inhospitable places.

They were following up Dr Hughes' 2006 expedition, funded by the Royal Geographical Society, to a nearby spot in Montenegro researching features carved into the landscape by past glaciers.

But he got more than he bargained for when he stumbled upon the real thing  - a glacier which was until that point completely undiscovered. In 2009, they found four more in Albania.

Some of the findings were published in the December 2009 edition of the journal "Arctic, Antarctic, and Alpine Research", and a new research paper will appear in "Earth Surface Processes and Landforms" this year.

The glaciers are at the relatively low level of 2,000 metres - almost unique for such a southerly latitude. Most glaciers at this latitude are usually much higher, and many only survive on higher mountains further north, such as the Alps.

The Prokletije mountains - known as the 'cursed' mountains in Albanian - extend from northern Albania and Kosovo to eastern Montenegro in the Western Balkans.

The glaciers - the largest of which is currently the size of six football pitches - vary in size every year according to the amount of winter snowfall and temperatures during the following summer.

However, the geographers think at least eight glaciers were present in neighbouring mountains during the 19th century, correlating with the culmination of the 'Little Ice Age' in the European Alps.

Physical Geography lecturer at the University’s School of Environment and Development, Dr Philip Hughes said: "We were amazed that - as far as we know - no-one, apart from local shepherds, were aware of the existence of these glaciers and it was tremendously exciting to find them.

"The fact that the mountains were until only recently surrounded by war and lawlessness might explain why they have proved so elusive.

"Only ten years ago, this area was out of bounds and crossing the border from Montenegro into Albania was prohibited.

"Another probable reason why we weren't aware of their existence is that very few people live in these mountains and there's so much late-lying snow and shadow they are not even visible on Google Earth."

But one day the researchers hope the glaciers will be enjoyed by visitors to the area - which is comparable to the Alps in terms of its attractiveness and size.

Dr Jeff Blackford said: "The reason why these glaciers can form at such a low attitude - and so far south - is that there are sufficient quantities of windblown snow and, in particular, avalanching snow.

"Though these remaining glaciers seem to be relatively robust in response to regional climate change, it's clear that there were more glaciers in the area a hundred or so years ago.”

He added: "While more glaciers existed a hundred years ago because of cooler temperatures, it is very difficult to predict the future fate of these remaining glaciers.

“This is because of the strong local controls on climate in the high mountains.

“But if it gets warmer then these glaciers will melt away."

The scientists hope to make it to the Prokletije mountains to continue their research later this year.

PhD student Rose Wilkinson said: "The trip provided me with an important opportunity to progress my research, which looks at how vegetation responds to changes in climate over the past 500 years.

"These glaciers - which have not been studied before - will hopefully create an interesting record of environmental change in this area."

Twenty-first Century Glaciers and Climate in the Prokletije Mountains, Albania is published in the journal: "Arctic, Antarctic, and Alpine Research" in December 2009: http://instaar.metapress.com/content/273213h3t4370272/

Little Ice Age glaciers in the Balkans: low altitude glaciation enabled by cooler temperatures and local topoclimatic controls in the journal "Earth Surface Processes and Landforms" to be published in 2010 and currently in press: http://www3.interscience.wiley.com/journal/123206091/abstract