Graduation for student who’s dedicated her PhD to Syrian children 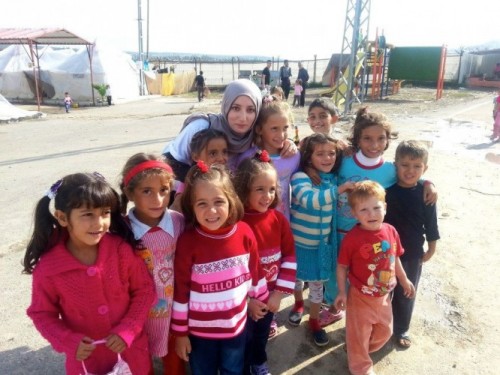 A University of Manchester psychology student who has dedicated her studies to helping Syrian refugee families graduates today (Friday, 18 December).

Aala El-Khani began her PhD at Manchester in 2011 just as the war in Syria broke out and people living in the country began to be displaced. Moved by the scenes she saw, Aala changed the subject of the PhD to exploring ways to support families and children in the warzone and nearby refugee camps.

During the course of her studies she has visited refugee camps in Syria and Turkey numerous times exploring the parenting needs and challenges of families. Having identified a significant and urgent need for families to access parenting support, Aala, along with colleagues, funded by the ESRC, developed a system of inserting parenting advice leaflets into bread parcels which have been distributed to people living in the conflict zone.

This advice helped parents and their children begin to overcome the traumatic events that they have fled, with 3,000 leaflets distributed over three days and a response rate of over 60%.

The leaflet has been adapted and is now being translated to various languages as a possible tool for refugees across Europe. It was uploaded in Swedish and within 45 minutes was downloaded 343 times.

Aala said: “I initially started my PhD on a different topic, but as the events in Syria unfolded, and with my background in parent training, as well as having two young children myself, I began to wonder what it must be like to parent children in war and refugee situations and how could families in that context be supported through training and advice.

“My supervisor, Professor Rachel Calam was incredibly supportive, even though changing your PhD subject is quite an unusual thing to do. Her attitude was, ‘If that's what you want to do, and it means so much to you, then let's do it' and this is the kind of support I have had throughout my PhD from my supervisory team.”

As well as the work in Syria, Aala and colleagues have been helping Syrian refugees in Manchester. She received funding from the Wellcome Trust which enabled her research team to put on an exhibition of artwork by children in refugee camps, of the images they’d seen and raise awareness of the issue. A documentary film was also commissioned which shows interviews with parents talking about their journey with their children from the warzone to the UK.

The end of the PhD doesn’t mean the end of Aala’s work on behalf of Syrians. She and her colleagues have been expanding the development of a parenting intervention that they are currently trialling in Turkey where she has already trained four teachers and has received funding to do the same with refugee families in Manchester.

At her graduation, Aala will be presented with a special award: the Sue Fielder Memorial Award for outstanding academic achievement. Her supervisor, Professor Rachel Calam, Head of the School of Psychological Sciences, said: “Working with Aala is an inspiration. She shows how much can be achieved when you work with both your heart and mind.

“Her research has highlighted the psychological needs of children and families fleeing conflict, and created new ways of offering help. Her work is already recognised as being of international importance, a tremendous achievement for a PhD student.”

Working with Aala is an inspiration. She shows how much can be achieved when you work with both your heart and mind.

Graduation for student who’s dedicated her PhD to Syrian children