Graphene gets a Teflon makeover
Newsroom

Graphene gets a Teflon makeover 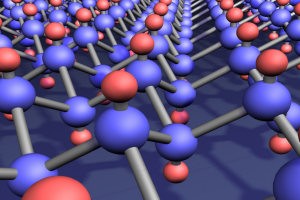 University of Manchester scientists have created a new material which could replace or compete with Teflon in thousands of everyday applications.

Professor Andre Geim, who along with his colleague Professor Kostya Novoselov won the 2010 Nobel Prize for graphene – the world’s thinnest material, has now modified it to make fluorographene – a one-molecule-thick material chemically similar to Teflon.

Fluorographene is fully-fluorinated graphene and is basically a two-dimensional version of Teflon, showing similar properties including chemical inertness and thermal stability.

The results are this week reported in the advanced online issue of the journal Small. The work is a large international effort and involved research groups from China, the Netherlands, Poland and Russia.

The team hope that fluorographene, which is a flat, crystal version of Teflon and is mechanically as strong as graphene, could be used as a thinner, lighter version of Teflon, but could also be in electronics, such as for new types of LED devices.

Graphene, a one-atom-thick material that demonstrates a huge range of unusual and unique properties, has been at the centre of attention since groundbreaking research carried out at The University of Manchester six years ago.

Its potential is almost endless – from ultrafast transistors just one atom thick to sensors that can detect just a single molecule of a toxic gas and even to replace carbon fibres in high performance materials that are used to build aircraft.

Professor Geim and his team have exploited a new perspective on graphene by considering it as a gigantic molecule that, like any other molecule, can be modified in chemical reactions.

Teflon is a fully-fluorinated chain of carbon atoms. These long molecules bound together make the polymer material that is used in a variety of applications including non-sticky cooking pans.

The Manchester team managed to attach fluorine to each carbon atom of graphene.

To get fluorographene, the Manchester researchers first obtained graphene as individual crystals and then fluorinated it by using atomic fluorine.

To demonstrate that it is possible to obtain fluorographene in industrial quantities, the researchers also fluorinated graphene powder and obtained fluorographene paper.

Fluorographene turned out to be a high-quality insulator which does not react with other chemicals and can sustain high temperatures even in air.

One of the most intense directions in graphene research has been to open a gap in graphene’s electronic spectrum, that is, to make a semiconductor out of metallic graphene. This should allow many applications in electronics. Fluorographene is found to be a wide gap semiconductor and is optically transparent for visible light, unlike graphene that is a semimetal.

Professor Geim said: “Electronic quality of fluorographene has to be improved before speaking about applications in electronics but other applications are there up for grabs.”

Rahul Nair, who led this research for the last two years and is a PhD student working with Professor Geim, added: “Properties of fluorographene are remarkably similar to those of Teflon but this is not a plastic.

“It is essentially a perfect one-molecule-thick crystal and, similar to its parent, fluorographene is also mechanically strong. This makes a big difference for possible applications.

"We plan to use fluorographene an ultra-thin tunnel barrier for development of light-emitting devices and diodes.

“More mundane uses can be everywhere Teflon is currently used, as an ultra-thin protective coating, or as a filler for composite materials if one needs to retain the mechanical strength of graphene but avoid any electrical conductivity or optical opacity of a composite".

Industrial scale production of fluorographene is not seen as a problem as it would involve following the same steps as mass production of graphene.

The Manchester researchers believe that the next important step is to make proof-of-concept devices and demonstrate various applications of fluorographene.

Professor Geim added: “There is no point in using it just as a substitute for Teflon. The mix of the incredible properties of graphene and Teflon is so inviting that you do not need to stretch your imagination to think of applications for the two-dimensional Teflon. The challenge is to exploit this uniqueness.”

General illustrations for graphene can be found at  http://onnes.ph.man.ac.uk/nano/Images.html

More details, and higher-resolution images, are available from the Press Office.

Teflon is a trademark of Dupont science. For more information contatc http://www2.dupont.com/DuPont_Home/en_US/index.html